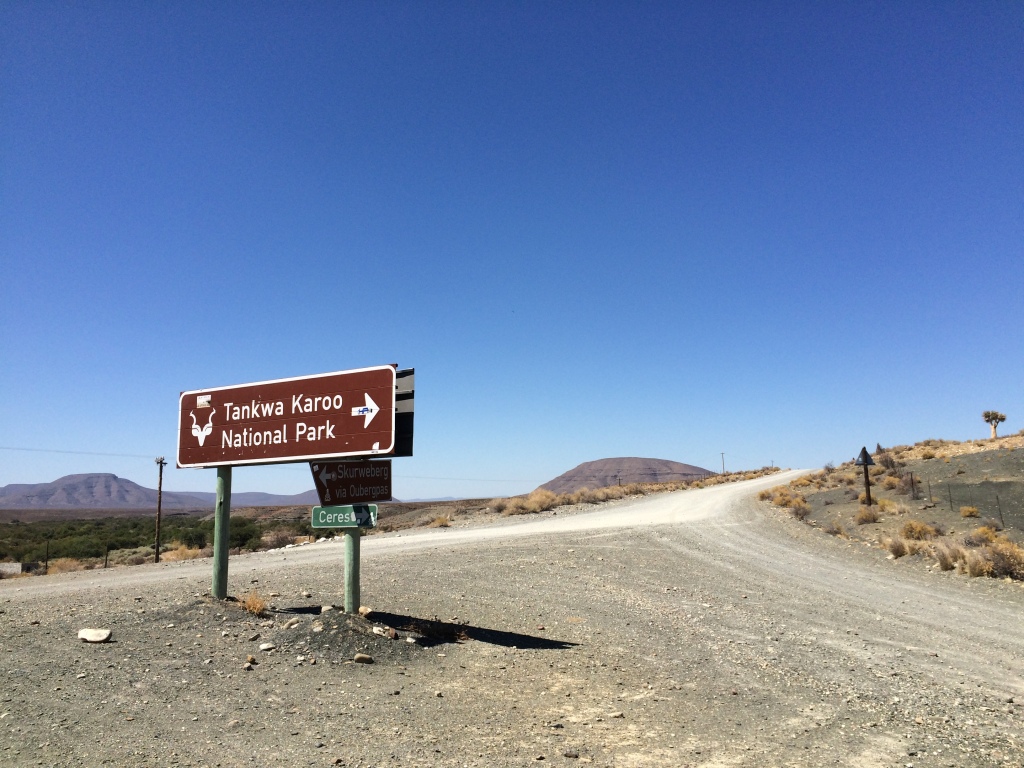 [ Part 3 of the South Africa series that began with Cape Town Weekend, and continued in Clanwilliam. ]

On Wednesday morning, following two nights in Clanwilliam, I started for the Tankwa Karoo National Park. Named after the Tankwa river that flows near its southern border, the Tankwa Karoo is an arid region at the western edge of the Great Karoo desert. On Google Earth the park terrain looks like a rusted tin sheet with tiny ridges the colour of mould. Few roads are visible, and there is no settlement large enough to merit a mention.

About forty kilometers from Clanwilliam, not long after the Cederberg Wilderness Area, the tar under the wheels disappeared. I was expecting a gravel track on the route, but not so soon. With a hundred and seventy kilometers still to go, I recalled the YouTube video I’d watched the previous evening. ‘Changing a flat car tire step by step’ featured a serious-looking American in a full-sleeved shirt, grey pants, and formal shoes, who used terms such as ‘lug wrench’, ‘lug nuts’, and ‘hub cap’. He made the technique look straightforward but I remained unsure, like the MasterChef contestant who has never cooked a meal, only committed recipes to memory.

The unpaved road, about fifteen feet wide, was sprinkled with small stones and crushed rocks fragments. Avoiding the sharp ones I followed the faint trails of tyres, keeping a steady sixty kilometers per hour, but the occasional bumpy patch of small rock outcrops slowed me down to twenty. After ten minutes or so I settled down and looked at the landscape. The red earth was freckled with dust-ridden shrubs. A brilliant blue sky was patched unevenly with white. In the distance grey mountains rose to meet the sky. There were no trees, and no signs of animal life.