[Part 3 of the Interpretations series.] 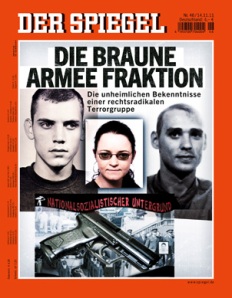 Earlier this month, xenophobia again grabbed the headlines in Germany. Investigations following the arrest of a woman, one of three members of the “National Socialist Underground” group, revealed that they had killed nine people between 2000 and 2006, and injured many more with a bomb in 2004; eight of the nine killed and most of those injured were of Turkish origin. Until this recent discovery, none of these hate crimes against foreigners were linked to the neo-Nazi group. (Suspicions were directed instead at the Turkish mafia.) The news caused the Germans embarrassment, shame, and regret, in that order. Media uproar followed, and the issue reached the parliament. Chancellor Angela Merkel called it a “Disgrace”. Politicians renewed their call for a ban on the far-right National Democratic Party (NPD). On the 22nd, two weeks after the sensational discovery, the parliament issued a joint statement that began: ”We are deeply ashamed…”

END_OF_DOCUMENT_TOKEN_TO_BE_REPLACED

As the date approaches, the world comes together. In the last two weeks I’ve often felt that we all are being manoeuvred towards that point of collective recollection of what happened ten years earlier. All the media – the Radio, the Television, the Internet, the Magazines, the Newspapers, the Posters – conspire to remind us that ten years have passed. The world changed that day, they all say, so spare a thought.

My world did not change that day. I drove to work, returned earlier than usual, watched news on the television more than usual, and slept. I went to work the rest of the week, and the week after. I bought groceries on the weekends, visited the library to borrow books. Life continued, the weight of daily routine pulling me forward in a well-defined orbit, a cycle I had been following since I arrived in Germany. Occasionally I heard of people losing their jobs, but I did not lose mine. I also heard of people being harassed at airports, bring profiled along racial lines; I was asked to remove my shoes, which I did — it was a price I was willing to pay for the safety of crossing the Atlantic. But as I continued to tell myself that my world hadn’t really changed after 9/11, something entered my life, unbeknownst to me, like an odourless gas that enters a room through the crack beneath a door. I had begun to pay attention to the world, to follow events regularly, at first the ones related to 9/11 and later, broadening my field of vision, other world affairs. My distaste for politics had not decreased, but I could no longer ignore its consequences. The public space had entered my private life.

END_OF_DOCUMENT_TOKEN_TO_BE_REPLACED

At home news enters our lives early in the morning, through the SWR2 radio channel. We listen to it mainly for the classical music, but the hourly news keeps us in touch with local reality. These days – in fact, since the beginning of 2011 – local reality has often been overshadowed by global, world-changing events.
END_OF_DOCUMENT_TOKEN_TO_BE_REPLACED