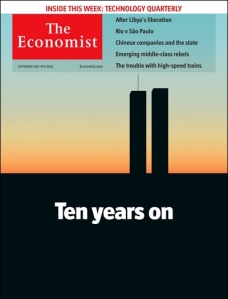 As the date approaches, the world comes together. In the last two weeks I’ve often felt that we all are being manoeuvred towards that point of collective recollection of what happened ten years earlier. All the media – the Radio, the Television, the Internet, the Magazines, the Newspapers, the Posters – conspire to remind us that ten years have passed. The world changed that day, they all say, so spare a thought.

My world did not change that day. I drove to work, returned earlier than usual, watched news on the television more than usual, and slept. I went to work the rest of the week, and the week after. I bought groceries on the weekends, visited the library to borrow books. Life continued, the weight of daily routine pulling me forward in a well-defined orbit, a cycle I had been following since I arrived in Germany. Occasionally I heard of people losing their jobs, but I did not lose mine. I also heard of people being harassed at airports, bring profiled along racial lines; I was asked to remove my shoes, which I did — it was a price I was willing to pay for the safety of crossing the Atlantic. But as I continued to tell myself that my world hadn’t really changed after 9/11, something entered my life, unbeknownst to me, like an odourless gas that enters a room through the crack beneath a door. I had begun to pay attention to the world, to follow events regularly, at first the ones related to 9/11 and later, broadening my field of vision, other world affairs. My distaste for politics had not decreased, but I could no longer ignore its consequences. The public space had entered my private life.

In a Paris Review interview that took place in 2005, Salman Rushdie brings up this feature of our present condition:

I think the space between private life and public life has disappeared in our time. There used to be much more distance there. It’s like Jane Austen forgetting to mention the Napoleonic wars. The function of the British army in the novels of Jane Austen is to look cute at parties. It’s not because she’s ducking something, it’s that she can fully and profoundly explain the lives of her characters without a reference to the public sphere. That’s no longer possible, and it’s not just because there’s a TV in the corner of every room. It’s because the events of the world have great bearing on our daily lives. Do we have a job or not? How much is our money worth? This is all determined by things outside of our control. It challenges Heraclitus’s idea that character is destiny. Sometimes your character is not your destiny. Sometimes a plane flying into a building is your destiny. The larger world gets into the story not because I want to write about politics, but because I want to write about people.

Rushdie overstates the case when he says that world events “have a great bearing on our daily lives.” I think the influence is more psychological than material: we fear that world events will have a bearing much more than they actually do. This fear makes us sit-up and take notice, and to deal with it we talk and write about these distant events.

The “our time” that Rushdie refers to did not begin with 9/11. The last few decades have seen the world become increasingly connected: global trade has interlinked economies; migration has connected lands and peoples; the fall of the Berlin wall in 1989 broke down political barriers; in the last decade, the digital revolution brought us closer and (in Friedman’s jargon) made the world “flat”. Events at a faraway place can now affect us much sooner than they did before. When France and Italy have a spat over refugees and there is talk of returning to a pre-Schengen era, I am keen to follow that thread because it may soon decide how easily I can cross borders in Europe. When Fukushima explodes, production in nearby factories stop, global supply chains are affected, and a deal with an American company we expected to come through fails to materialize. Such cause-effect chains we see today highlight a trend that began to accelerate after the Industrial Revolution; so 9/11 may have been a recent catalyst, a wake-up call, but the intersection of public and private spheres was scripted much earlier.

If the public is now cosily in bed with the private, is it possible to write intimately about the private without hinting at the public? How many contemporary writers have embraced the private sphere and have remained fiercely apolitical? Among my favourites, I can count only two: Amit Chaudhuri and Jhumpa Lahiri. A friend recently wrote in a mail that Amit Chaudhuri is “excellent at creating a lifetime out of a moment and a universe out of a room.” That universe is a private one, and a reader of Afternoon Raag can see that in contrast to what Rushdie says, it is possible to “fully and profoundly explain the lives of characters without a reference to the public sphere.” Difficult, yes, but it can be done, and such a life can also be complete.

I have been facing this tussle in my writing, and this blog contains, in a few places, the tension between these two spheres: private and public. My intention is to keep this space focused on the personal, to write about “small things, local matters,” but increasingly I have had to fight the urge to go beyond the small and the local. Sometimes, times like this one, I give in.

6 thoughts on “The private and the public”