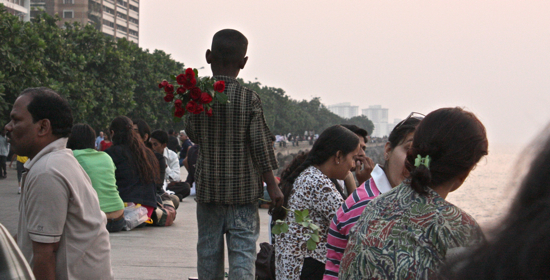 The Indian Drifter: A common feature of the urban Indian landscape, the Drifter is someone who is simply hanging around, doing nothing apart from wandering idly from one place to the next. Predominantly male, the Indian Drifter is easy to spot: standing listlessly on the street-side, squatting in front of a shop, installed next to a street peddler, snoozing in a park – you get the idea. The Indian Drifter is not to be confused with the homeless: he does not carry with him all his belongings, and gives the impression of someone ready to move on, quite unlike the homeless we see lodged permanently on the footpaths and subways in the West.

Drifters, through interesting in their own way, do not offer much variety to an observer – you tire of watching them after a while. But their counterparts on the street, the Workers, are a more interesting bunch. We saw a lot of them during our recent India trip; I’ve put some of them together in an album: Indians at work.

There are 23 of them in all (though the last picture, taken by Wife, is a bit of a joker in the pack), including some rarely-seen vocations like selling drums or riding an elephant. The collection isn’t a statistically significant sample, nevertheless it’s fun to look at this set and identify patterns or find individual quirks. Here are some observations:

These dimensions can be explored further, beyond the photographs. For instance, how much does each earn? Does the taxi driver earn more than the elephant rider? Does the cowherd make more money more than the fisherman? Are you better off selling magazines on the street or snacks in a railway station? Common sense may be misleading in getting to these answers – we can surely expect some surprises there. And then: how long have they been in the profession? The skilled ones – like cooking, drawing, fishing – would see a longer retention; some others like selling chat or magazines are probably temporary affairs, one in a sequence of occupations these people try their luck in.

The images present a vibrant side of India, one engaged in industry. (Ignore, for a moment, the taxi-driver taking a nap.) They also show, in a limited setting and scale, India’s entrepreneurial side, one where individuals with a little money invest it into an independent venture with the hope of making it big. The Workers, in choosing to struggle in their own ways, are an inspiration to the Drifters.

17 thoughts on “Indians at work”