1. You were at the beach when it happened. What was it like, that day on the beach?

There was no one in the water – it wasn’t warm enough for that, you know – but that apart it was like any other sunny day on the beach. Kids playing in the sand; families picnicking; women sunbathing; seagulls gliding; sailboats in the distance. Nothing unusual at all…except –

Well, there were two girls walking near the water, one photographing the other. In the beginning I thought it was all about photography practice, but then, as I watched them, I wasn’t really sure.

Initially, the girl facing the camera seemed to be actively posing – you know, as though she was training to be a model. Then, as if this was the most natural thing to do, the model takes the camera and starts photographing the other girl, who now plays the model. I watched them for a while, trying to see what each one was most serious about – but I couldn’t really figure it out. Both seemed equally passionate about both their roles. Somehow it didn’t make sense to me.

4. That doesn’t seem very unusual. Anyway, let’s get back to the beginning – you had arrived the previous evening, isn’t it?

Yes. We checked into a seaside hotel – Sand Dune, I think it was called – and went towards the town center for a walk. It was a village, really – just one main street, full of restaurants and souvenir shops, and a cluster of houses on either side. We shopped a bit, then dined at a Mexican restaurant. Over dinner K and I talked about our visit to the Deltapark Neeltje Jans earlier that day.

That’s right. The exhibition reconstructed the events of that night in 1953.  Its strange, isn’t it, that we visited such an exhibition just one day before it happened. But I guess all those who were at the exhibition that day and managed to survive have a similar story to tell. 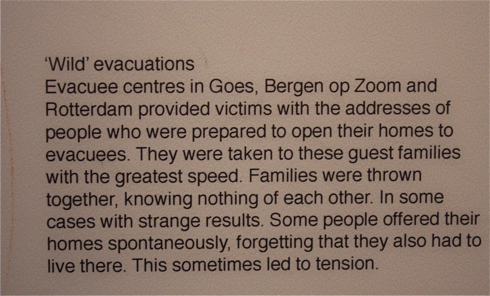 6. There is no one else – you were the only survivor in this region. What did you and your partner talk about the exhibition?

Well, we wondered how it must have been for people here that night, and we recollected episodes we’d read on how people stepped forward to help the evacuees. All that seemed far removed from the present, you know, the idyllic setting we were a part of.  We also talked about the dyke – no, wait, that was next morning.

The next morning we had breakfast at this place with an excellent sea view. I can remember it clearly – the vast blue sea, empty and calm. Not unlike a friendly neighbor minding its business in its own space, I thought.  I pointed to the dyke and confidently said that it would now withstand any storm, unlike what happened in 1953. Then – and I know you will not believe this, but I don’t really care – then, K asked: And what if the entire Greenland ice sheet melts?  I laughed at her. I really laughed at her.

8. That was your last breakfast together….

She said it was her best breakfast ever.  She even carried back the empty jam packet so that she could buy a jar of the same flavor when she got back.  But what I remember more vividly was our walk on the dyke the previous evening. There was a full moon, low in the horizon, rising slowly. An elderly couple crossed us, conversing gently in French. Then we spotted an eerie looking mansion, standing all by itself, surrounded by sand. After a while we found ourselves at a spot where we had long, unobstructed views on both sides. There, with the sea to the right and the land to our left, it was plainly visible to the naked eye: this land, the Netherlands, was really below sea level! It’s one thing to read this in a book, and quite something else to see it so clearly with your own eyes. There was a moment of uneasiness, a moment when my imagination ran ahead, but it didn’t last long: the evening was too beautiful to be disturbed by such thoughts.

9. And the next day, after breakfast, you both went to the beach.

It was a bit cloudy at breakfast time, but soon it turned into a fine, sunny morning. Near the beach a young musician was playing the accordion, and the music made it merrier. I can recollect the  sense of elation that swept through me – a wonderful beginning to a much-needed vacation, I thought. On the beach, after watching others for a while, I began to feel drowsy. I assumed it was the balmy weather. The sea was just as we’d seen it the previous day – flat and calm. Before closing my eyes I looked at K – she was reading a book, something on Indian mythology, with vibrant-colored figures on the cover. That’s the last thing I remember.

10. Do you often think back to that day?

Not really. But I sometimes dream about the two girls. There they are, hopping from one spot on the beach to another, exchanging roles – you photographer, me model; me photographer, you model – and oblivious of everything around them. At one point they’re almost hidden behind the sand, and I then see the water advancing, silently, but with purpose. It occurs to me that I must shout, must warn them, but I don’t. I know it’s pointless.