It happened the other day, on an evening that was turning into one of those you forget as soon as they are over, unremarkable and ordinary in every way. Until it happened, that is.

I am following Eric Newby’s thoughts in The Big Red Train Ride, as he describes the history of the monastery of St.Sergius, a site that the Rossiya – the Trans-Siberian train, Moscow to Vladivostok, 5810 miles, 7 days – crosses on its journey through the countryside beyond Moscow.  The sight of the “mass of spheres and domes” reminds Newby of their visit to the monastery only a few days ago. In particular, he describes the “austerely beautiful” Cathedral of Troitska.

“The day we visited it, before boarding the train, it was crowded with pilgrims, mostly women….”

He uses these pilgrims as a means to detail the interiors of the church, making brief historical allusions along the way.

“There they were, confessing their sins…; paying their respects to St.Nikon; drinking and taking away holy water from the miraculous well housed in a little multicoloured chapel close by; and crossing themselves before the sarcophagus of the usurping tsar, Boris Godunov.”

After a while it becomes tiring. The descriptions are laden with unfamiliar history, metaphors spring up every few sentences, and the pace is slow; I need a change of mood, something lighter and fast-moving. Nearby, along the glass partition where we’ve placed the Tintin collection, I spot Red Rackham’s Treasure, a sequel to The Secret of the Unicorn which I’d finished the previous week. It seems an appropriate choice.

On the second page of Red Rackham’s Treasure, in a frame showing a fuming Captain Haddock walking towards a morris column full of advertisements, I see something that makes me stop:

The ‘opera’ advertisement that refers to ‘Boris Godunov’ reminds me of something I had seen only moments ago. I pick up the Newby book again and find the Godunov reference in the chapter I’d just finished. Could they be referring to the same person? What did the Godunov of the opera have to do with this “usurping” Russian Tsar worshipped to this day by pilgrims visiting a monastery near Moscow?

I decide to find out.

A quick Internet search reveals that the opera Boris Godunov is about the Russian Tsar,  who succeeded Ivan the Terrible’s son Feodor in 1598 and ruled until his death in 1605.  The opera, composed by Modest Mussorgsky around 1870, is based on a play – of the same name – by Alexander Pushkin.

So the two books were referring to the same person!

The coincidence is remarkable for several reasons.

First, the strange appearance of Godunov in a Tintin book. A background reference to a historical figure – or, for that matter, any real life entity – is a rarity in Tintin books. Although Herge, the author, offers visually realistic representations of the scenes in his stories, he does not pepper them with factual details from the real world. A building Tintin enters is labelled ‘HOSPITAL’ – we aren’t told which one (it isn’t relevant to the plot); Captain Haddock opens a crate of ‘OLD SCOTCH WHISKY’ – no brand is mentioned; a street vendor’s display reads ‘REFRESHM…’;  a sign outside a bar reads ‘BAR’. But when a real-life character  – or event, place, etc –  is mentioned, it fulfils a specific role in the plot. For instance, at the end of Red Rackham’s Treasure, we are introduced to a statue of St.John the Evangelist (holding a cross and with an eagle next to him) because he represents the all-important clue in a parchment which eventually leads Tintin to the treasure.

So given Herge’s tendency to generalize details unimportant to the plot, his choice of placing a specific reference to the Boris Godunov opera – in an unimportant background, and without using it elsewhere in the story –  is baffling. Why did he do it?  (The same morris column has another ad that mentions ‘Orson Welles’. As the Red Rackham’s Treasure was first published in 1943, this reference perhaps indicates the influence of Citizen Kane – released in 1941 – on the author. But was there a Boris Godunov screening in Brussels around that time? I could only find a mention of a 1935 premiere in Paris.) 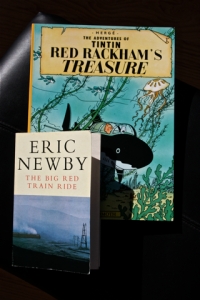 Second, the comment on Godunov by Newby.  Here again it is a passing reference – the Tsar is not mentioned again in the book – but less surprising for a travel narrative filled with trivia. (As an aside: Newby, in his choice of epithet to describe the Tsar, does injustice to Godunov: although the opera follows the assumption that Godunov ordered the murder of Tsar Feodor’s brother Dmitri – thus “usurping” the throne – this plot-line deviates from the historian’s view, according to which it was never proved that Godunov ordered the murder.)

Finally, the timing.  In the space of a few minutes, I come upon two references to an obscure 16th century Russian Tsar in two books of completely unrelated genres.  How often does that happen?

What does all this mean in a broader context?

First, there’s the role of art and literature in keeping history “alive”.  But for Pushkin’s play and Mussorgsky’s opera, Godunov may well have been consigned to the footnotes of history.  Through the opera, Godunov is referenced in various other works – including comic books like Tintin! – and he remains part of the conversation in different cultures.  (Godunov continues to performed to this day: there’s a series of performances by the New York Metropolitan opera later this year.)

Second, we see the relevance of detail in literature. Filling scenes with lots of (real-life) detail makes the work richer (and rewarding for readers in the distant future). I wish Herge had invested more on adding details – from the world he saw in the Forties to Seventies – in his works.  And I’m glad Newby didn’t edit out the little details – trivia, in a way – sprinkled all over his travellogues.

Third, there’s the enchanting notion of how connections between seemingly unrelated entities can be forged accidentally by us.  What, until now, was the relation between Red Rackham’s Treasure and The Big Red Train Ride? The juxtaposition of small parts of these unrelated works into a small continuum of time experienced by one reader brought about (what seems to me) a fascinating angle to a character both works had alluded to in the passing.  Serendipity, yes; and until now it was, for me, only a word in a dictionary.