“…you get the sense that it’s possible simply to go through life noticing things and writing them down and that this is OK, it’s worth doing.”
– Joan Didion

In the recent weeks, there’s been a lot of talk on Santa. A colleague at work noted, with a touch of regret, that his four-year old already knew Santa was none other than the neighbour downstairs, and that he came in not through the chimney – they had one – but the front door. Another parent was furious: during a ride before Christmas, the anchor on a car radio channel had announced, with all of them listening, that there really was no Santa, it was all made up. Back home the children wanted the truth out; she had had a hard time rescuing the myth.

Santa doesn’t figure in my childhood memories. The first time he appeared on the scene, between pages of an Enid Blyton book, I was already playing cricket on the street; a fat old man with a white beard didn’t interest me much, neither did his gifts. As a teenager I encountered him again in books, confessing naughty things he’d done to unsuspecting ladies. Then he disappeared, almost, popping up occasionally in a coke ad here and a comedy movie there.

In the last six months since we moved to this new apartment, he seems to have made a comeback. We’ve never seen him, or heard his footsteps, and I doubt he wears a costume. His gifts, thoughtfully wrapped on some occasions and left bare on others, always take us by surprise: they aren’t linked to any special event or festival. And, like that colleague’s four-year old, we know he is none other than the neighbour downstairs.

The first occurrence was soon after we moved in. One morning we discovered, outside our door, a bottle of wine – a Malscher Ölbaum Weißburgunder – and a Welcome! card that wished us a good time in the apartment. This, coming from the apartment owner, was as understandable as it was pleasing.

The second one left us puzzled. This time the wine bottle was accompanied by a letter. In broken English he explained that his car had recently been parked, inadvertently, on our parking spot; he deeply regretted the inconvenience this had caused, and offered, as compensation, a gift voucher. The envelope contained a voucher for a nearby restaurant; the amount, written on it in thick blue letters, was 150 Euros.

Some weeks later we found a jar of honey outside. No explanation was given. Later, during a stairway chat when I mentioned the honey, he said he had received some jars from a friend who owned a farm.

By this time Wife was curious – and a little concerned – about the man’s inclinations. “I’ve never seen such a compulsive gift-giver – he’s a bit crazy, don’t you think?” she asked. “I don’t really care,” I replied, licking the luscious honey off my fingers.

Not all gifts were meant for pleasure. Some, like the grease packet, had utilitarian value: a printout kept alongside the packet explained, with pictures, how to apply grease to door handles to keep them from getting stuck.

Towards the end of autumn, some men came and plucked all apples from the lone tree in the garden below. By now we knew the pattern: soon, we guessed, we would find a basket of apples outside our door. When, after a few weeks, the basket failed to materialize, our goodwill turned into intolerance: “How could he do this to us?!” Wife hissed; “We should have plucked a few ourselves.” I said. We had all but forgotten about the apples when, one Sunday morning, we stumbled upon two little jars of jam outside, accompanied by an A4-sized printout: 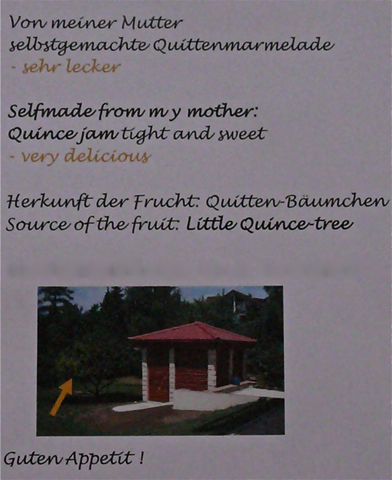 We looked at each other with a sheepish grin. Then, uncontrollable laughter. The next six weeks, during breakfast, the only marmalade I picked was the “selfmade quince jam tight and sweet”. It was, as he put it, sehr lecker.

The Christmas gift was the only one we could predict, but it was early. On 24th morning there was a box of chocolates, elegantly wrapped, sitting outside. Frohe Weihnachten, the card said. Santa was still here, doing his rounds.