[Part three of a series. Earlier parts: one, two.]

In March this year, on an evening spent browsing through albums of recent trips abroad, we decided to travel north. A road trip through Scandinavia had been a recurring plan for some years now, and this Easter seemed just right to turn intention into reality.

We planned little. Two anchor points – Oslo and Bergen – were fixed and the rest we left open, to be decided when we got there. Guides on the Internet – unreliable, like so much else there – suggested not to miss the unmissable train ride between Oslo and Bergen, so I booked that too. It was, as it turned out, too much planning. 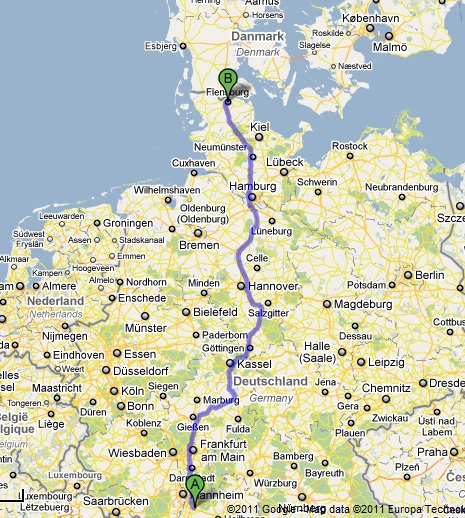 When we left on Thursday, the evening before Good Friday, a good half of Germany seemed to be on the road. Radio stations were interrupting themselves every few minutes with news of yet another stau, caused by an accident or roadworks or, in one instance, a dead fox on the highway. We soon joined one on the A5, a stop-and-go stau with brief moments of progression between idle, stationary periods. As we crawled, we looked for eye-catching license plates passing by:

The last one, which had me thinking about the future of the European Union, seemed like an essay title, The E.U. at 35, published in 2028. What would the world look like in 2028? Would we still have traffic jams?

Progress was faster on the A7, and we stopped for coffee a little after Hannover. The German spoken here had a different inflection. The lady who served us coffee, and another behind the cash counter, displayed a formal, almost regal touch – I felt we were guests in a royal banquet – a mannerism that, for southerners like us, seemed a little excessive.

I had informed the hotel – in Flensburg, near the Denmark border – about a late arrival, but reaching Flensburg even by 1 a.m. seemed unlikely. On a recent trip to Leipzig, a similar late arrival had led to an incident. The hotel reception was empty when we reached; on the desk, accompanying a note, was a key to our room, which turned out a single-bed unit instead of the double-bed room we had reserved. I called the listed contact number and explained the situation. The woman at the other end, either half-asleep or half-drunk, did not understand what the fuss was all about – I had the key, I had the room, so why didn’t I simply go and sleep? I repeated myself, slowly, in German, and she then understood; she would soon send the receptionist back to the hotel. When he arrived, wearing a wrinkled suit with an upturned shirt collar, the receptionist maintained an appearance of cheerfulness, joking about his mistake in assigning us the wrong room. What we received next was a large suite, at least twice as expensive as the room we were paying for.

I called the hotel in Flensburg and said we would arrive later than planned. Don’t worry, a young man’s voice replied. When we reached around half past one he was wide awake, staring at his computer screen, scanning messages on a Facebook wall. I filled out a form as he handed me a key and indicated the breakfast particulars: 6:30 to 10:00 am, in the room at the end of this corridor. 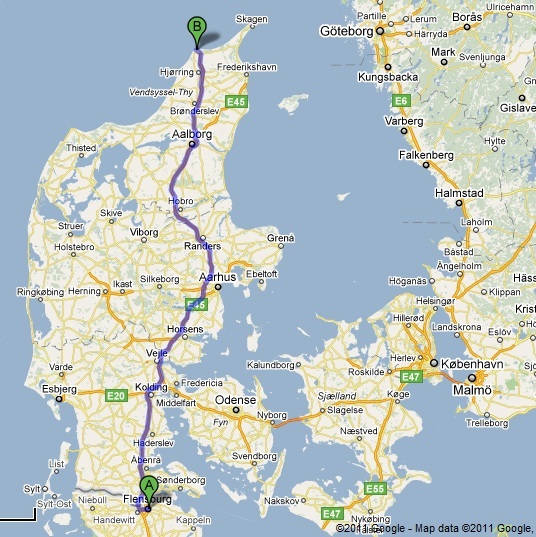 The next morning we left early. The four hour drive to Hirtshals, our ferry point near the tip of Denmark, took us through a flat, dry landscape. Cars on the highway looked like ants inching across an enormous flat disk towards the edge of the world that seemed to recede further as we drove. Near Hirtshals we were enveloped, almost suddenly, by a dense fog: North Sea was in a different weather zone.

At the Color Line ferry checkpoint, the lady – a Danish girl with a pony tail that bobbed as she spoke – collected our ticket and asked us to join line 5. In Lines 1 to 4 were cars and vans with German, Danish and Norwegian license plates, mostly packed with equipment – camping gear, bicycles – and belongings. Boarding time was half an hour away, and some people were outside, walking a dog or strolling about. Everything around us – container ships, docks, cranes and other heavy machinery – was of inhuman scale, and the fog added a sinister tint to the atmosphere: it was a scene from a sci-fi thriller.

Boarding was smooth, almost robotic in its precision. Cars entered the hull in straight lines – like little fish wading into the open mouth of a large one – and parked bumper to bumper. Inside, on the passenger decks, people moved quickly to occupy table spots next to the food court, and when the counters opened, a flood of passengers surfaced and swamped the floor. 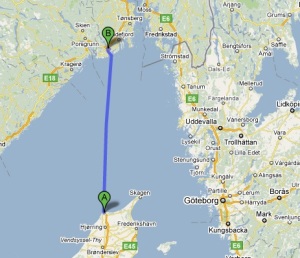 The interiors of Superspeed2 felt like a Las Vegas casino: carpeted floors, sofas with red-leather upholstery, and a sense of artificiality one feels in enclosed spaces with few windows. Crew members, in all-white uniforms with ‘Superspeed’ embroidered on their backs, walked about like adults in super-hero costumes. Children had queued up in a corner, quiet and well-behaved, behind a man giving away toys and sweets.

This was my first cruise experience, and my worries about sea-sickness came to nothing: North Sea was dull and placid, and we hardly felt the ship move (at 25 knots, the display said). It was only later, in a corner of the duty free shop, that I found visible effects of movement: in a rack full of beverages, sleeping wine bottles gently clinked against one other, creating a pleasing jingle at a steady tempo. Standing there, watching the rocking motion in this rack full of evenly-shaped bottles, it seemed as though this was the engine of the ship, the instrument that steadily powered its advance. 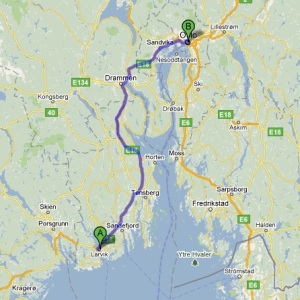 At Larvik, our destination port in Norway, the weather had turned sunny again. After a small delay – caused by customs officials checking vehicles for inexpensive goods being smuggled into expensive Norway – we started driving along E12, the road to Oslo. It was a small highway, and traffic was thin. On both sides were fields with dug-up earth, a vast stretch of dull-brown broken in places by clumps of pine trees, colourful farmhouses and the occasional hill. The scenery did not change much, and as we entered Oslo we knew this was not the landscape Norway was known for. The mountains and the fjords were still far away north-west, beyond Oslo.

4 thoughts on “The road to Oslo”