[After Arrival, Progress, and Curiosity, this is the fourth installment in the ‘Visiting Home’ series. The narrator, an Indian living abroad, is on a visit to Bangalore, discovering and interpreting facets of life in the city and at home.]

The days passed quickly. I woke up late each morning, completed my exercises, and settled down to read English, August after a heavy breakfast under Ma’s watchful eyes, quick to notice my empty plate, and her nimble hands, ready to refill it with another helping of uppitu or akki rotti or idli. Friends I intended to meet were at work all day, so I spent the afternoons indoors, reading, writing, and scanning the irregular Bangalore skyline through the window of my room, avoiding the heat outside.

The only birds I saw were kites, circling above crowded tenements in search of prey, and pigeons, lodged on apartment windows. A pair of pigeons had nested outside my window, and the two eggs I’d seen on the first day had morphed into small yellow creatures that barely moved. I had taken to watching over their growth, returning many times each day to check for progress. The chicks, soft lumps of flesh with yellow hair, tiny grey beaks and dark slits for eyes, could both fit into my palm, but I did not try and pick them up. Three or four pigeons were always perched nearby, like relatives who had come by with compliments for a newly born.

The pigeons piqued my curiosity, so on a hot afternoon I put down my book and looked up the Internet to find out more. The technique beneath a pigeon’s homing instinct, an unsolved riddle when I last read on this subject a decade ago, was (Wikipedia said) still an open matter. One theory pointed to the pigeon’s ability to detect Earth’s magnetic field, another more recent finding suggested an orientation facility based on environmental odors, and yet another fell back on the conventional notion of visual clues in the landscape. The mystery had not affected the pigeon’s role in delivery: until as recently as 2002, when India’s Police Pigeon Service in Orissa had been shut down due to rising costs and competition from the Internet, pigeons had been used to deliver messages; there was even a method, blandly termed ‘IP over Avian Carriers’, to transmit Internet messages using pigeons.

In the middle of this brief exploration my thoughts began to wander. Do pigeons know exile? Are there deserter pigeons – ones that leave home never to return? Can a pigeon have two homes?

The heat soon got to me and I decided to take a nap. When Ma woke me up, she reminded me, gently, that the driver would soon be here. What driver? I asked, still half-asleep, but then I remembered: I had to visit Janaki dodamma that afternoon. I had put off visiting relatives for a while, but Ma had been persistent and I finally relented. I couldn’t drive by himself (Not in this chaos, Ma! I’d said), so a driver had been called for the afternoon.

The driver was half an hour late and offered no explanation for the delay. I did not bother to ask. He was a thin, young man in a crisp navy blue shirt, black pants, polished shoes, and his oily hair was combed flat. With a tie, he could pass for a salesman. He bowed slightly as he collected the keys, a mannerism that indicated years of habit. Traffic was moderate. I spotted a few new brands – Chevrolet, Skoda – but the big names were missing.

What about Audis and BMWs? I don’t see any of those on the road, I asked the driver in Kannada.

Those are rarely seen on weekdays, sir, the driver replied, in a loud and confident voice that belied his quiet manner until then. You’ll see them on weekends when the traffic is less. And many of them will be driven by owners.

Have you driven any? I asked.

Yes sir, he replied, turning towards me. When I was a full-time driver, my owner had a fleet of cars. I drove a Bentley, a Mercedes and a BMW.

Bentley? I was surprised. Why did you leave?

Full-time job has no flexibility, sir, he said. I have to go at times decided by the owner. In this job I can decide when to take up something.

He worked for EasyDrive, a service that connected clients to a pool of independent drivers. Registered drivers who called in to notify their availability were assigned customers in their area. It was a scheme that allowed him to choose when he wanted to work. 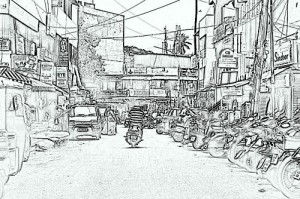 We had a long drive ahead, and the driver – Venu, as I learned later – seemed willing to talk. Venu had started as a driver at eighteen, almost as soon as he could acquire a license. He had worked for private car owners most of his career – thirteen years now – many of them rich businessmen or politicians, people he only felt contempt for now. I asked why.

They were all, without exception, brutal in their ways sir, he said. Each one a real bastard.

I was surprised by the sting in his words. Did they treat you badly? I asked.

No sir, he said, they treated me fine. But I got to know of many of their dealings. They are all rogues, laundering money in lakhs and crores. And some regularly visited prostitutes.

This wasn’t surprising: corruption here was not a rare disease, and drivers discovered their masters’ ethics over time. It could not, by itself, explain his animosity. Did they try to involve you in their illegal deals? I asked.

Thank God sir, they didn’t do that, he said, shaking his head. Otherwise I’d have left sooner. But it was bad anyway. He paused, pointed to a beggar – a haggard-looking woman with a tired baby in her arms – and continued: You see that woman there? They’d give such a woman a fifty rupee note, and announce to others in the car that one should also do something for society. Such rascals!

The woman was outside my window now, tapping the glass with her right hand, looking at me with pleading eyes that conveyed a mixture of despair, resignation and a faint hope. For a moment I wondered if I should give her some money, but for some reason I chose not to, and turned away instead. We had stopped at a traffic intersection next to a half-finished flyover. Scooters and motorbikes sneaked through narrow spaces between cars and buses. Next to the red-traffic light, a digital counter ticked-off the remaining seconds. At five seconds, engines whirred, and at three the front row was already inching forward, raring to go.

But then, continued Venu, as if a valve inside him had been turned on. The whole world is like that, sir. Everybody wants money, takes bribes or does shady things in search of more money. The politicians are the worst, but the rest are not much better. The whole world is screwed up sir. Totally screwed up.

This was an extreme outlook, and I was once again surprised. I wanted to understand where this came from. It can’t all be that bad, I said, in a tone that signaled a challenge. Look, there are so many people doing things for society. The government may be slow, but look at the NGOs and individuals doing things, contributing money. Don’t you see all the good that people are trying to do?

That may be, sir, but where are the changes? he said, almost in defiance. Tell me why do I still have to struggle to get my daughter into a good school? Why can’t I do that without paying a bribe? Why can’t I get a gas connection without paying someone under the table? Why is that woman still begging on the street?

No, sir. My life hasn’t changed in any way. Others may have made money, but I am where I was. And these small changes you mentioned sir, they will take us nowhere – it’s like using a bucket to empty the sea.

I smiled, involuntarily, at his simile, and this cut the cord of tension that had wound itself around me. I realized it was pointless continuing the argument. So what’s the solution, I asked.

The solution sir? Kingdom of God. I’ve read a lot of scriptures, sir, and it’s all written there: all that has happened before, all that is happening now, and the future.

It is really simple sir, he said confidently. An educated person like you will immediately understand it. There will come a time when everything around us will be destroyed, and in the new kingdom everybody will love everybody, there will be no more unhappiness, and no death.

This sounded familiar. Are you, by any chance, a Jehovah’s Witness? I asked.

Yessssirrr!! Venu’s voice rose sharply and he turned towards me, eyes wide open. Have you heard of Jehovah’s Witnesses?!

We had another forty-five minutes to go. God, I’m fucked, I said to myself.

Later, thinking back to the bitterness and venom Venu had directed toward the world, it began to make sense. The ideology that led to his bias had to be built on the premise that the world was severely flawed: without this foundation, their edifice of beliefs would crumble. Venu, anticipating his paradise, had turned the world he lived in into a vision of hell.