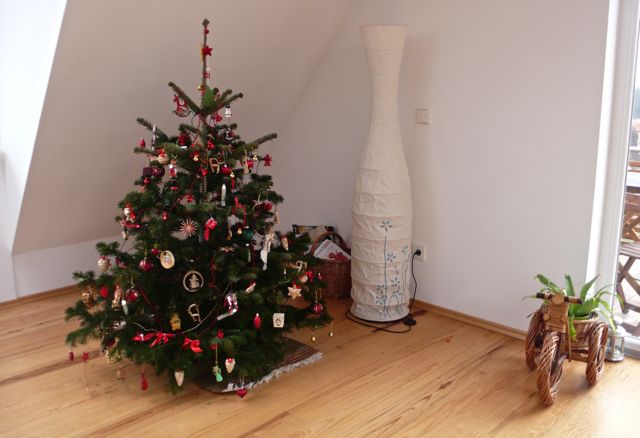 In the last ten years or so the Christmas and New Year week has, for us, acquired a particular significance, shaped by a culture-driven consciousness that this is a period of renewal, a time to take stock of the year gone past and to prepare for the new one ahead. Renewal, old giving way to new, is conveyed through a total shut down of commerce (workplaces are empty; business slows to almost a halt; stores are closed from the afternoon of 24th until the 27th morning, and if you do not stock up earlier only the kindness of neighbours or friends can save you), and all the year-end lists in magazines and newspapers send home, unequivocally, the message that this is a changeover period. In all, a sense of ending, an intimation of a beginning.

I do not remember the year’s end this way before I came to Germany. Growing up in India and Nepal, this period had no significance, except, while writing into my school notebook after the new year I often found myself enumerating the old year: a trivial matter of switching the dates. (This trivial matter of the date assumed a not-so-trivial significance at the turn of the millennium, on the 31st of December 1999, a night both Wife and I spent at our workplaces awaiting alerts raised by the infamous year-two-thousand bug, dubbed the Y2K, like a code for something sinister, which ultimately turned out a false alarm: a red herring that hid the actual cause for worry, our increasing dependence on a network of interconnected systems controlled by a few and understood by fewer.) The real new year came later, in March or April during Ugadi, a festival that marked the year’s beginning in the Hindu (Saka) calender. But there was little of the Georgian New-Year mystique associated with this festival: to us it was another date in a string of events marked in red letters on the Bangalore-Press calender my mother hung in her kitchen, a public holiday like other festivals through the year, a day of rituals and a day of the feast. December, then, was an ordinary month; Santa was the stuff of fairy tales and nursery rhymes set in a faraway land, and new-year resolutions a concept alien to us until the West introduced it, along with other commercially lucrative ideas, to the local culture and media.

This December has been different. On the 20th my eight-year old nephew arrived, with his mother, from the United States, to spend the Christmas holidays with us. Wife decided to maintain the tradition the boy had grown up with, so we bought and setup a small Christmas tree, a first for us. The boy wrote a letter to Santa, listing the gifts he wished for and promising good behaviour in the year ahead. Late on the 24th, after he’d gone to sleep, we wrapped the gifts and filled the large stocking with books, toys, and games; next morning, as he opened one gift after another, mother and aunt expressed wonder and amazement at Santa’s generosity. The boy agreed that kids in Germany got a better deal from Santa than those in the United States. I couldn’t but help think that kids these days anywhere get a better deal than we ever did in our childhood.

As the years pass, we look back more often than we did in our younger days, and it is in this activity, as an aid to recollection, that the partitioning of the past into identifiable years acquires a practical value and gives meaning to all our end-of-the-year lists. Since I think of this blog as a memory chest, I’ve jotted down some 2011 experiences and discoveries I’d like to remember later: (To keep the list short and readable, I’ve limited each category to three items.)

It is a personal list, but as I’ve discovered some of these through lists shared by others, the hope is that such a list will spawn new discoveries for you, dear reader. Your presence, both visible (through comments and links) and anonymous (through statistics), has kept me going, and I thank you for the interest, engagement, and the conversation. I wish you all a wonderful 2012.