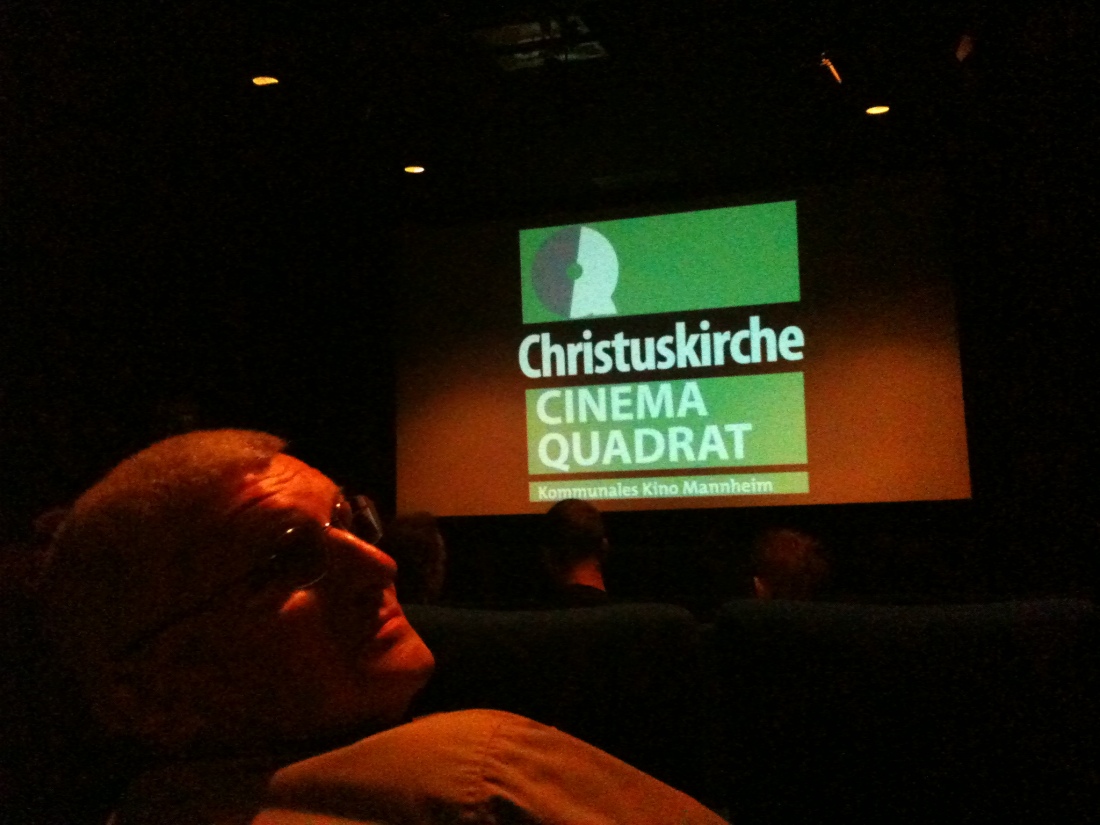 Cinema Quadrat in Mannheim, the small theatre that screens art movies, attracts cinephiles who look like extras in a period film. Their monthly programme lists a special show: zwei Überraschungsfilme der extraklasse. You buy tickets for an evening with two unnamed films, and allow yourselves be surprised.

I am not one of those who love to submit a few hours of a day to the whims of another person. I can barely endure the romantic comedies Wife forces me to watch with her each month. (Why I sit through them remains a mystery.) But I was in an adventurous mood that evening. I suggested to Wife that we drive to Cinema Quadrat and let ourselves be surprised. She agreed – a decision she soon came to regret.

The lobby outside the cinema hall seemed crowded: in place of the regular two or three solitary individuals there were on this day about a dozen people, sitting or standing together. At the counter when I enquired on the length of the movies that evening – not the titles or the directors, but just how long – the girl giggled. Then she shook her head. She didn’t know, she said. The one who chose the movie usually turned up a few minutes before the start, and no one knew what his choice would be. Not even the projectionist. So we bought our tickets and took seats near the exit, just in case.

A bald man, middle-aged, appeared next to the screen and began to address the audience. The evening’s theme, he said, was horror. Wife and I looked at each other; what I saw in her eyes was horror. Small insects at home can draw from her the loudest of screams, and she cannot bear any hint of dramatic tension in a movie. If she could sit through a horror film, I could stick my hands in a hornet’s nest.

Let’s watch for a few minutes, she said, in concession. The Serpent and the Rainbow, a voodoo-horror film from the 1980s, began with a eerie sequence in a South American jungle, and moved to Haiti where the protagonist searched for a zombie. In the ten or so minutes we stayed in the hall, a dead man’s eye was pierced with a needle, insects crawled out of another corpse’s orifices, a zombie sprang out of nowhere in a dark graveyard.

Outside, in the lobby, the bald man was now behind the counter. I smiled at him and said that horror unfortunately was not to our taste. He returned an understanding nod: the public mostly wants horror, he said, so I give them horror. But this wasn’t the only theme; his four thousand or so films at home had plenty of diversity, and he sometimes chose Thrillers, Sci-Fi classics, Westerns or Samurai specials, and so on. Wife winced at the mention of these categories. I knew what was on her mind, what sort of film I’d have to sit through at home that evening.

One thought on “Kino stories”