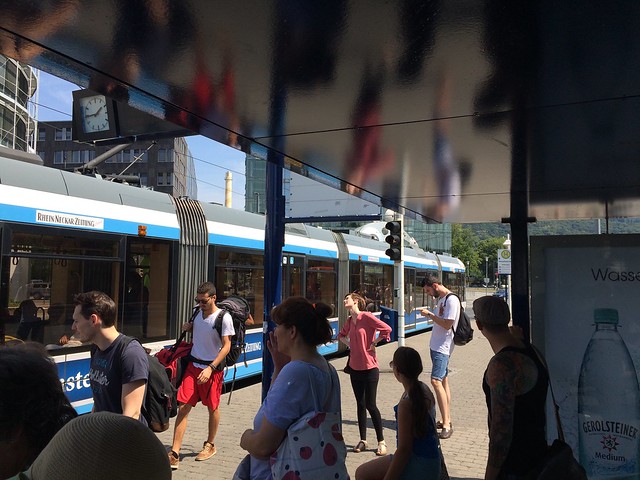 “What a rage of life flows around us all the time, invisible, inaudible, but intense and ever present.”
— TEJU COLE, The sense in turning away

The new car arrived last Wednesday, two-weeks late. We’d returned the old one in July, before our US vacation, so for three weeks in between I rode on trams and buses and trains to work and back. The Deutsche Bahn app laid out my morning plan:

You could call this rush hour, but while there was briskness — people streaming in and out of platforms with an energy seldom seen in this small city — there was no rush. I always got a seat. And often there were people nearby willing to talk openly, if not loudly, amongst themselves or on the phone. I could not get myself to do this in such closed public spaces, but I was glad — for once — the others were not like me. One morning, not long after I boarded the S4 in Heidelberg, a dark-skinned young man facing me began to speak on the phone in Kannada.

I could feel my ears stretching to catch every word. He was talking to a friend in Bangalore, a woman whose boyfriend had left the previous night for Frankfurt. She’d gone to the airport to see him off, and the young man on the phone asked if she had turned emotional there.

“Full feelingaa?” he asked, smiling to himself. If you are familiar with this form urban Kannada, you’ll sense the tone of one gently teasing the other. There’s a warmth in that expression, and an informal intimacy you see between friends in college or just out of college.

Hearing this in a Bangalore restaurant or bus would perhaps be commonplace, but in this S4 compartment exiting Heidelberg that phone conversation carried me into another world. And it seemed extraordinary that I could “tune in” to sentences entirely unintelligible to my fellow passengers. The magic of language, so common that we hardly give it a thought, struck me with a force.

I spotted this young man on other days, standing by himself on the platform. Like a stalker I would follow him into the train each time, try to get a seat near him, just to hear a few more of his words. I never did, but what I’d heard that first day I knew would stay with me a long time.

Over the weeks a routine developed, a pattern with places and times and people, and this created a frame in which to observe regularities and their opposites. I had to cross roads twice each morning, first to get to Bismarkplatz, later into the Hauptbahnhof, and every day I saw pedestrians ignore the red light. I did not join them. (P laughs at my sticker tendencies, labelling me more German than the contemporary German male.) Once, on a rainy morning, two women trotted across the empty Sofienstrasse toward Bismarkplatz. I watched their footsteps and then turned to my left, where another woman stood. She seemed to have been observing me watch those jaywalkers, and she smiled at me. We are not like them, her eyes said, we’re different. I smiled back. I then noticed she was holding her daughter’s hand, a girl of four or five who stood clutching a doll with golden hair. Was her restraint due to the presence of the child?

Waiting for the light to turn green, I wondered if this wouldn’t be a useful test to decide what rules to break in public: ask yourself if you’d do it under the eyes of your child. There’s a reversal in this idea that I found attractive. The same parents who are constantly reminding their children not to do this or that are now, with this approach, using the child not to transgress themselves. 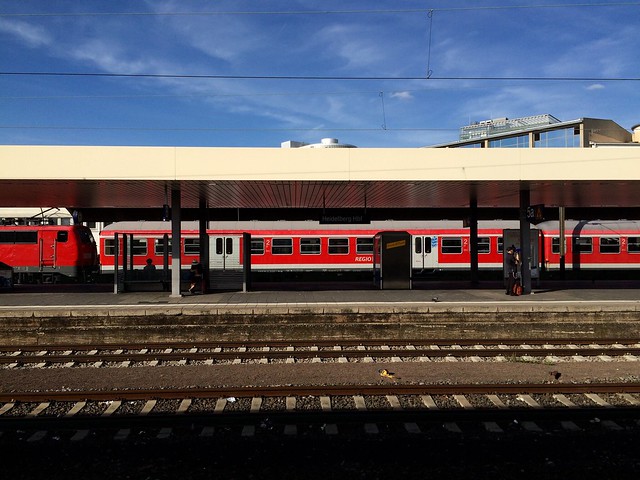 A familiar face of a stranger on the platform or in a bus drew me to look more closely, comparing everyday changes: the corporate mien of today’s suit that a pair of jeans erased tomorrow, the unvarying chirpiness of the plump Turkish woman at the Le Crobag cafe, the difference a companion makes to the young man’s mood from one day to next, the altered aura of a woman who ignores her phone today and reads a book instead: little things one misses in the absence of such a routine. Driving a car to work seemed to exclude some of the rage of life that flows around us all the time, waiting to be absorbed, assimilated. (Walking, I realised, is not quite the same. My walks do not follow a routine. I do not go out every day, and the routes aren’t the same. I haven’t spotted as many familiar strangers in two summers of walking the altstadt as I did in three weeks of public commuting.)

Last Tuesday, on the tram to the Hauptbahnhof, I noticed a middle-aged German woman facing me a few feet away looking sternly at a young woman across the aisle. This young woman, not more than twenty, with a dusky complexion and middle-eastern features (she could be Iranian, I thought), wore a knee-length formal skirt over dark stockings, a short grey coat over an olive-green blouse. She sat cross legged, half-way into the aisle, and was busy texting. I couldn’t read why the middle-aged woman was looking at her up and down and shaking her head. Was it the short skirt? The incessant absorption in the phone?

A minute later another passenger, a fat woman with short dark hair, got up to leave. She stood in front of this young woman, and when the stockinged legs did not budge, the woman stepped over them and walked past. Watching all this the middle-aged woman had begun to mutter to herself, eyes wide with disbelief. I couldn’t help smiling, and when she saw me she smiled in return. I held her glance for a brief moment before turning away. Perhaps I’d intruded. But when I turned toward her again, some moments later, she was still looking at me and smiling. Watching her my smile grew. We’d created a connection, and it didn’t matter if we read each other’s thoughts perfectly. The young woman sat oblivious to all this, her attention tethered firmly to the phone.

When the Hauptbahnhof arrived the middle-aged woman stood up to leave and addressed the young one firmly: “Entschuldigung!” This shook the young woman out of her absorption. She appeared lost for a moment. Then she shifted her legs aside and offered an apology. The middle-aged woman marched forward, and as she crossed she looked at me with a smile that covered her entire face. I caught a glint in her eye, the look of a tiny triumph. I smiled in return, and nodded. Then I kept smiling all the way to work.

Strangers are all around us, we pass scores of them each day, and often we barely register their presence. Our social networks span the people we know, and we believe it is this circle of relatives and friends that meets our social needs. These weeks without the car made me examine this assumption. The momentary connections I shared with strangers in the city seemed no less enriching than long evenings with friends. Each lasted but a few moments, and yet there was something deeply human about them. Perhaps we need this net of strangers as much as we do need our friends. You see this better when you travel alone, surrounded only by strangers. Observing them, connecting momentarily with them, helps navigate unfamiliar spaces and makes them memorable. The kindness of strangers never fails to move us, and there are moments when a familiar stranger feels closer than an unfamiliar friend.

10 thoughts on “In the company of familiar strangers”