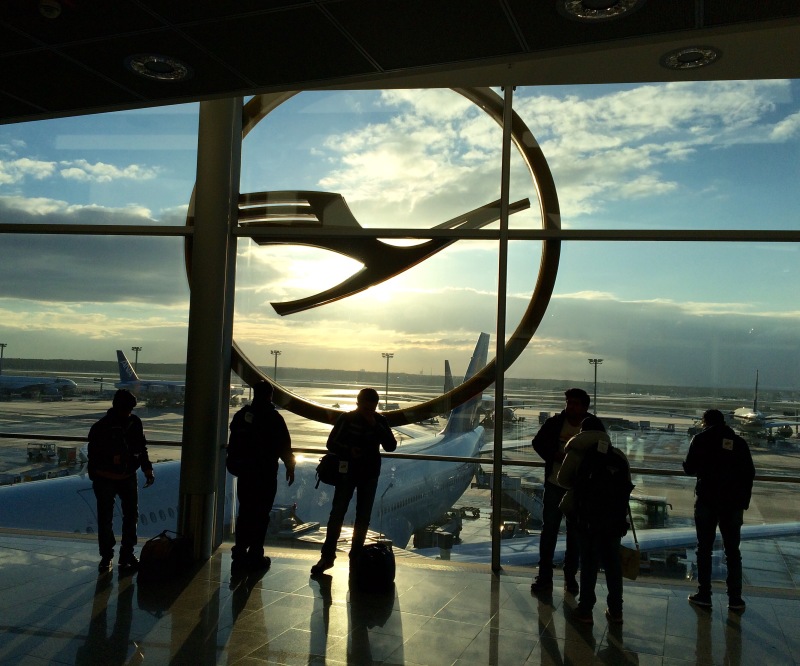 On the flight to Athens a blonde-haired girl of about seven or eight sat beside me, on the aisle seat, separated from her twin brother and her parents on the other side of the aisle. My first response, upon seeing this little companion, was a mixture of surprise and delight: children usually stay close to their parents in flights, and a girl sitting apart is rare. She sat reading a storybook in English, and below her feet was a pink-coloured school bag filled with more books, a collection she explored through the two and half hour flight, replacing one and pulling out another with care. The bag, I discovered, held comics and storybooks in English and German, and reading them she displayed the none of the distractedness children usually do, flitting from one interest to another.

She sat absorbed in her books through the duration of the flight. Not once did she turn and seek her parents. She managed the in-flight meal experience by herself, asking for a drink (Cola), nibbling the sandwich like a grown-up, and returning the empty tray when the stewardess came by. And when her brother began to tease her and poke her, playfully trying to distract her from reading, she dealt with it by elbowing his hand away or snapping at him. She was not the playful type, or perhaps she wasn’t in a mood to be playful. I do not recall seeing her smile.

The parents, for their part, left the girl alone. Father and mother did not turn to look if the girl was doing fine; they seemed to know she was. The brother also carried a bag of books (his was brown), and while he sought his sister’s company occasionally, trying to attract attention across the aisle, she ignored him. They both did not bring out any electronic devices, and I did not spot their parents using a smarphone either.

In the beginning, I considered starting a conversation with the girl, but her reserve kept me from trying. I also wasn’t sure if it was appropriate, but since her parents were in the picture I discarded my doubts and, at a moment she looked up from her book, I asked if she was travelling to Greece on a vacation. She nodded, before returning to her book. There was no eye contact. Later, when her dinner tray slipped as she returned it to the stewardess, I offered help but she refused, turning away silently.

During the landing, she remained focussed on her book. After we docked at the gate, she picked up her bag and followed her parents and brother down the aisle, the bag on her back bobbing with the weight of all those books.

4 thoughts on “All those books”