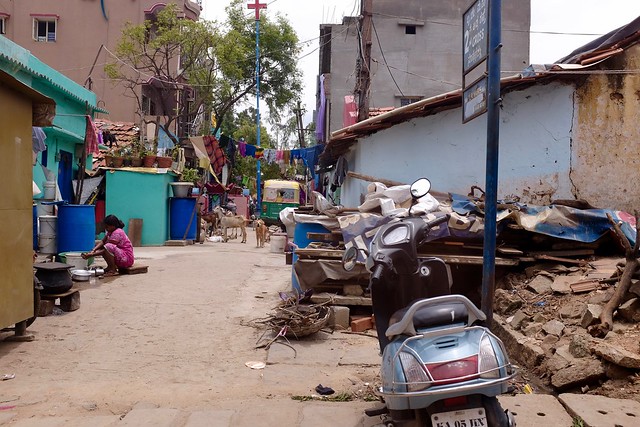 (Part 6 of the Bangalore Days series that began here.)

We moved to Germany in late 2000, and our first visit to Bangalore came two and half years later, in 2003. I was curious to see how Bangalore had changed. I was also uncertain, after this period abroad, what to expect, and unsure of my response to the city.

On that first visit I began to notice the differences between the privileged and the poor, an evident trait that had escaped my attention in the past. The inequality was striking, and I wondered what might be done to change this Janus-faced society. But by the end of the third week the gap bothered me a lot less than it had on the first day. The juxtaposition of luxury and poverty was a common feature here, and I had relearned to take it for granted. This conditioned indifference seemed natural and puzzling at the same time. It occupied my mind after I returned, but not for long: life in my immediate surroundings in Germany held a power those distant scenes lacked.

The thoughts and emotions surfaced again on following visits to Bangalore. I saw that while some had grown visibly richer, things had barely changed for others; and what the streets conveyed was at variance with the growth statistics I’d seen. These observations were followed by a sense of helplessness, and later, indifference. On each visit the cycle was similar. Noticing the contrast, worrying about it, then ignoring it: after a decade this pattern was so well set that scenes in Bangalore (and my response to them) stopped bothering me as much as they once did. On every following visit I noticed less than I had before.

It happened again in 2013, beginning with an incident the day I landed in Bangalore.

I was at a hair-cutting saloon. The barber, a chatty man in his thirties, spoke about life in the cities he had worked in: Hyderabad, Mumbai, and now Bangalore. Every few years he moved to a different city. This nomadic instinct, he said, was fuelled by his desire to see different people in different places.

Coming from a barber, this was unusual; it was a wish one typically heard from the middle-class. But there was something different about this barber, a mien that set him apart from others of his ilk. He had an assured air that did not belong here, but he seemed to contain himself just enough to display the distance between himself and his patrons this class-conscious society had come to expect. He appeared comfortable in this role. If there was any resentment he felt towards his middle-class patrons, he did not show it.

After years of living in different cities, what he had learned was this: people everywhere were the same. They had the same desires, the same fears; greed, corruption, kindness, and love — you saw the same everywhere. The conclusion carried a weight of finality, and a calm indifference.

When the barber finished, I paid for the haircut and picked up my camera from the counter. Another barber, standing idly with an ear to our conversation, stepped forward and asked: how much did the camera cost? I tried to shrug him off, but he persisted, which aroused the curiosity of my barber. Just tell us how much — what’s wrong, he said.

The camera in my hand was a Fuji X100, a small model with a retro design, and a year before I had paid eight hundred Euros for it. Eager to escape, I relented. It costs around fifty thousand rupees, I said.

The barbers were stunned. After a few moments of silence, my barber, still holding the ten rupee tip I had handed him a minute ago, asked: Fifty thousand? There was incredulity in his voice, and there was more. It made me uncomfortable. I did the math again, just in case I had erred with the conversion. But the figure was correct. I nodded, before slipping away.

Their reaction left behind an uneasy feeling. In the days that followed I did not take my camera out. I was conscious of what I wore and how it contrasted from people on the streets. I averted my eyes from elevator boys. This sensitivity subsided after a week, but the unpleasantness the barber incident had provoked lingered. It made me consider the difference between classes not in abstract terms but in the form of a number: the price of an item I could easily afford, a tag well beyond the reach of the other. The difference was enormous, and I wondered if the gap had been this wide when I was growing up. My father too had worked abroad, but the wealth he possessed had been far more modest. Could such an incident have happened to me twenty years before, or to my father when he was the age I am now?

Some weeks later I returned to Germany. The following weekend, as I was walking on the main shopping street in town, I sensed a lightness I had not known for weeks. The relief was almost physical, and I wondered why.

It was a Saturday morning. Locals were on their way to shops or returning home. Outside Woolworth I saw our putzfrau, the maid who cleaned our apartment, looking at handbags on sale. I greeted her as I walked past. In Bell Conditorei, the local cafe, the checkout counter woman from a local supermarket was sitting at a table sipping tea. I then understood the source of my lightness: I saw no difference between myself and people around me here.

In Bangalore, I had experienced the opposite. Every social transaction — with the security guard at the gate, the fruit seller on the street, the rickshaw driver taking me home, the man behind the shop counter — carried the patina of difference. I could not think of them as equals. After a week in the city I had grown familiar with this difference, but evidently a dim awareness of it had remained.

Germany had lifted from me a burden I had not known I carried, and the contrast struck me with the force of an epiphany. I wrote about this epiphany, this weight of inequality that had sat on my shoulders, and the matter continued to occupy me for some weeks. Then, as life wore on, those thoughts gradually disappeared. Living in Germany was a shield against the uncomfortable truths one faced everyday on the streets of Bangalore. It was another form of escape, not dissimilar to the gated community dwellers in Bangalore who kept the city at a remove, living luxuriously in their apartments and villas.