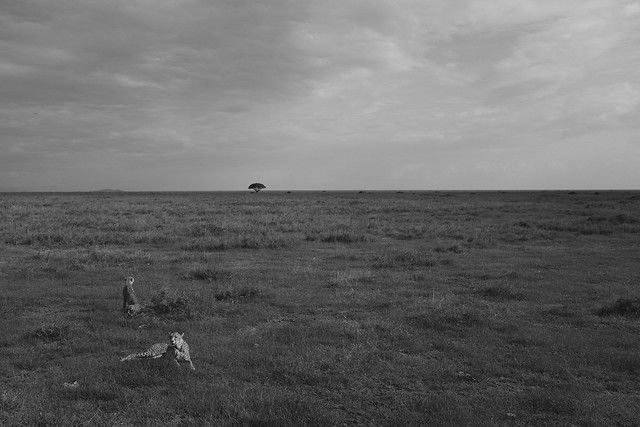 Our first day in Serengeti. We had just seen a leopard descend from a tree and walk away into the savannah — a rare sighting, in the opinion of Gerald, our driver-guide. Leopards were shy, and often the only glimpse they offered visitors was a faint flicker of a spotted coat behind a foliage. We were lucky.

Gerald drove further from that kopje into the vast emptiness. Some minutes later we saw, in a flash that lasted perhaps two or three seconds, a cheetah chase an impala. The impala got away. And in the instant the chase ended the cheetah lay down on the grass, a manoeuvre whose speed and grace was as stunning as the chase itself. Gerald said she was staying low to stay out of sight, to seek another chance, another prey. And he said it was our vehicle that had distracted the cheetah from the kill.

We had saved a life; we felt happy. Then the cheetah’s young one appeared, following the mother. That young cheetah will probably go hungry today, Gerald said. He felt sorry for it. Our happiness was short-lived.

Gerald stopped our 4×4 some meters from the pair. On the opposite side, a few hundred meters away, the impala stood looking in this direction, alert to any move by the cheetahs. But they stayed put, and we moved on.