(Part 3 of a series that began here. P and I have just arrived at Sacha, a lodge in the Ecuadorian rainforest; we are part of a group led by our guide Daniel.)

The room safe was locked when we checked in. Eduardo, the barman who came to unlock it, looked Indian. American Indian, not Indian Indian. The staff was mostly Indian, and while our skin tones matched theirs, P and I were the only real Indians.

Next day, on the safe’s display, 4 appeared when 1 was pressed. Summoned again, Eduardo laughed like a boy seeing the errant display. It’s the humidity, he said; use only the last column of digits — that will work! It probably would, but the reduced attack vector would also render the safe useless. This did not enter Eduardo’s calculations. The safe had a symbolic purpose: to calm down tourists used to seeing them in their rooms. We left it open.

That first afternoon, not long after we arrived, Daniel led our group (Pierre, Dominique, Julie, and us) on a short canoe ride around the lake. We spotted flycatchers, oropendolas, and hoatzins. The hoatzin, whom Daniel called a stinky turkey, flew between trees in an ungainly fashion, cawing like a sick crow. A bizarre bird with reptilian features, it looked like a prehistoric creature.

In the evening, over dinner, we learned Pierre was a retired lawyer.

I put people behind bars, he said.

Used to put, said Dominique, his daughter, a sports instructor.

They lived in Zurich. Both looked French, had French names, but they spoke Swiss German. Which meant I could not understand most of what they said to each other. (Swiss German is what you get when a regular German has an upset stomach.) Earlier on this trip to Ecuador, they’d been to the Galapagos for a week.

Post-dinner a night walk was planned, but P & I were jetlagged — we excused ourselves.

Next morning, we heard footsteps outside at five thirty, followed by a rap on the door.

At six Julie and Dominique were already at the Balsa, eating pancakes. Pierre ambled in some minutes later. He looked as if he had something to say.

They charge so much money for the room here, he said, before pausing. And then they don’t let you sleep in it.

At a half past six we assembled at the northern perimeter of the lodge. All of us were in wellingtons, chosen the previous day from a collection maintained for guests. Daniel led us into the forest, carrying on his shoulders a small telescope, stopping in places for a brief lecture: the kapok tree, primary and secondary rainforests, medicinal properties of plants the natives used, the serrated tree bark used to grate vegetables or cheese.

It was surprisingly easy to walk through the primary forest. Little light reaches the forest floor here, which limits the spread of vegetation at this level. The secondary forest was brighter and more dense, but revealed few signs of wildlife. Much of the rainforest wildlife — birds, monkeys — is on the trees, and we soon found ourselves climbing Tower 1, which was connected to Tower 2 and Tower 3 by a rope bridge. The lodge advertised it as the Canopy Walk.

It was a different forest down below, in the middle of the climb, and on top. At fifty meters the tower’s platform sat above the tallest trees, and all around us there was only green canopy. It was a half past seven. Facing the rope bridge, to our right the sun was beginning to rise above the forest’s rim. In the far distance the Napo glimmered like a strip of brown metal. The air here was alive with sights and sounds we had missed down below: the many-banded aracari, the white-throated toucan, a flock of screeching mealy Amazon parrots, howler monkeys staking out territorial claims. It was a different plane of life.

As we walked across the bridge, hanging above the forest, our shadows fell on the canopy to the west. We spent an hour on Tower 2, looking for birds, feeling the sun grow hotter each minute. My memory of bird sightings that day is eclipsed by what we saw two days later, atop the tree tower.

Returning along the same trail, in a thick section of secondary forest Daniel spotted a crested owl on a low branch. It looked wise, and unshakable. We took turns looking at it through the telescope, some even managing iPhone photos through it. Then, not far from the lodge, a troop of pygmy marmosets passed by. 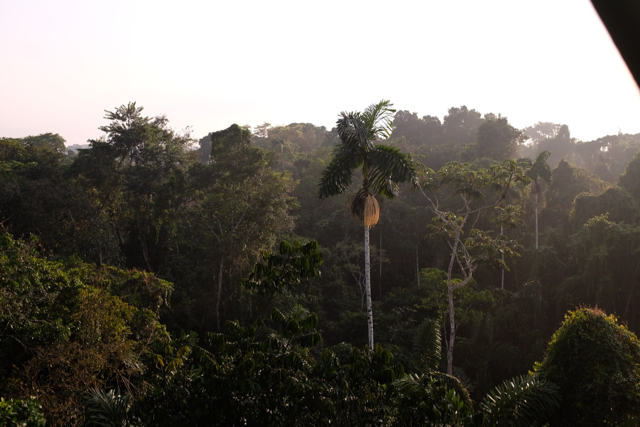 Back at the perimeter, we scrubbed and washed our boots before entering the premises. Lunch was an hour away.

Crocodile is shorter, came the reply.

There was another walk following lunch, but I stayed back. Rain arrived late in the afternoon: not a heavy downpour, and it passed quickly. The canoes returned laden with huddled figures in ponchos.

At dinner, Pierre was sour about something.

You know, I did not expect it to rain here.

By then I had started jotting down Pierre-isms in my notebook. Dominique would laugh at his quips, but she seemed not to have inherited her father’s penchant for deadpanning.

Dinner was a buffet at the Balsa, but not before we endured another speech by Fausto, the manager. Introducing his staff, he said ninety percent of those who worked here were local hires, from indigenous tribes. Employing them was one way of helping these communities. The guides were from outside, so was he himself. Daniel, sitting at our table this evening, told us he was from Quito. During his research he’d chosen Sacha for field work, part of which was an attempt to understand birdwatchers visiting such lodges. He had come up with a three-part classification. On top were the die-hard ones: nothing beyond birds interested them; they grew upset if a guide strayed; it was hard to please these folks. The serious bird-watchers came next, folks who also liked to indulge in other activities; they were more balanced in their approach to the rainforest. Then came the rest, who looked at birds and photographed them because they were there, and because there was Facebook.

What about people like me? It was Pierre again.

We slept early that night, lulled by the muffled sounds of cicadas in the forest.