Half a kilometer from our hotel was the street we had to cross to get anywhere in the city. This was also the Istanbul’s most famous street, Istiklal Caddesi, situated not in the old city (the historical peninsula that was Constantinople), but in Beyoglu, across the Golden Horn. Reaching Istkilal from Mis Sokak, we turned left for Taksim square, right for Tünel. Taksim led us to Kabatas, a ferry terminal on the Bosphorus; at Tünel one took the funicular to Karakoy, another ferry terminal at the tip of the Golden horn. We crossed — endured — Istiklal a dozen times that week in Istanbul. The street was a corner of the city we learned to love.

I remember the first evening well. It was Saturday, a warm night on which half of Istanbul was on Istiklal. (Wikipedia estimates that up to 3 million people visit the street on a single day during weekends; that’s one fifth of the city’s population.) A fairground atmosphere, with lights strung across the street as they usually are in Christmas season. The glitzy shopping scene (many global brands, a few local ones) was European, but everything else –the bustle, the energy, the faces, the noise — felt Asian. The smell of roasted chestnut was unique, so were the troops of riot policemen stationed every few hundred meters. Helmeted, dressed in dark blue uniforms, these young men and women conveyed vigilance without appearing hostile. Some were chatting amongst themselves, others were busy with their smartphones, yet more were watching people on the street. While the rest of Istanbul did not seem to care, something about these troops made me uneasy.

The riot policemen were always present. And on several occasions we saw on the street protests or demonstrations of some kind. Most of these were “quiet” (they went about making speeches or distributing pamphlets without trying to stir up emotions), although one was particularly loud and led to a tense situation near Tünel with ranks of vigilant policemen blocking the path of shouting protesters. The locals simply walked past such scenes as though they were everyday occurrences that lead nowhere. But the Taksim square protests did lead somewhere, and this was only a few months before.

We picked up, after a few days, some rhythms of the street. In the mornings, at the intersection where Mis Sokak meets Istiklal Caddesi, an elderly shoe-shine man set up his equipment and sat down to wait for customers. I saw him polishing shoes only once through that week, but he had other tricks up his sleeve. On a rainy morning when umbrella vendors sprung up here and there (offering transparent plastic umbrellas for 5 Turkish Liras), this old man went up to one of them, borrowed a few umbrellas, and stood in a corner selling them to passersby. Then there was the father-son pair that stood at different parts of the street on each day, playing the accordion and collecting money. They were a happy pair, always smiling at each other or at people walking past. P. was enchanted (charmed by father or son I still do not know), and clicked pictures sufficient to fill an album. I also had fleeting but recurrent glimpses of a budding romance between two security guards stationed a few meters apart at the entrance to a mall. The dark-haired young woman at one end appeared to send silent messages (I’d forgotten how much can be conveyed without saying a word) to the shy young man opposite her, who responded with smiles and blushes. Except one afternoon, when he looked distracted; the reason became clear when I looked to the other side: in place of the woman was a man, staring blankly at the shoppers crossing into and out of the mall.

Food options on Istiklal were plenty, but what I remember most are the pistachio Baclavas we ate at Saray Muhallebicisi. Describing it is pointless (although, even as I write these words, I’m salivating) — there’s no other sweet dish like it.

Then there was Yusuf. We met him on our first evening on Istiklal when P. and I wandered into Insan Kitap, a bookstore almost at the mid-point between Taksim and Tünel. He stood next to the cash counter, this young portly smiling Turk with a beard, and he welcomed us as though we were friends. Perhaps he had a special liking for India, or for Indians — I do not know. Despite broken English his warmth was unmissable (so much can be conveyed without words), and we chatted about Turkey, India, Germany, Turks in Germany (about whom he had only a vague idea). We visited the bookshop several times that week, to browse the English collection on the first and second floors. On each occasion Yusuf offered us a generous discount. On our last evening we were there again, not to pick up any more titles but to say goodbye. He offered further discounts and asked us to choose more titles. Refusing him was no option. He came upstairs to the shelves I was browsing, and at the end of our conversation he took out a string of prayer beads from his pocket and handed it to me. This for you my friend, he said, smiling. 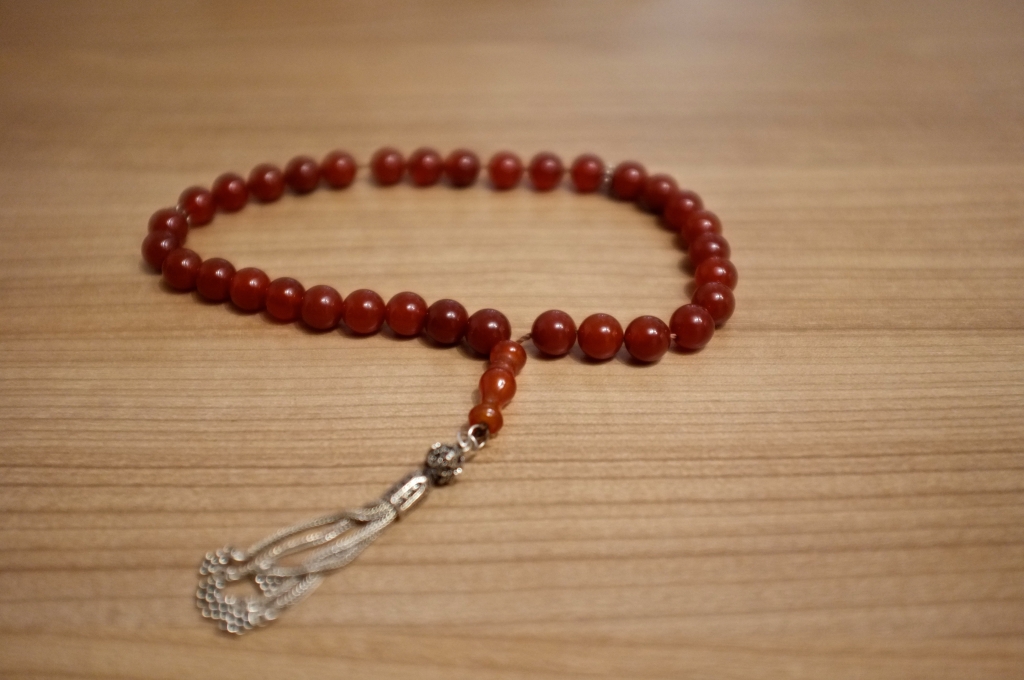 Downstairs, after I paid for the books, Yusuf and I hugged and wished each other well. Then P. and I walked back to the hotel, crossing our last stretch through Istiklal with Yusuf’s prayer beads clicking against one another in my pocket.