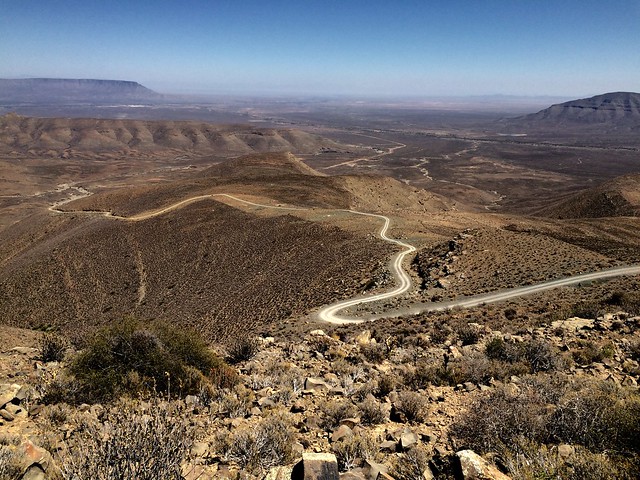 A mountain pass leads one to expect, on the other side, more mountains, or a descent into a valley, but at the top of Ouberg Pass was a landscape that resembled, all the way to the horizon, a rolling meadow. In place of grass the land here was peppered with small shrubs. I had climbed over a thousand meters onto this featureless country, where a low sky hugged the land and the horizon swayed in gentle waves as the dirt road dipped, curved, and rose again. It was surreal, and this feeling persisted even after I spotted some farmhouses in the middle distance, the only sign of humans in an hour of driving on these endless highlands. 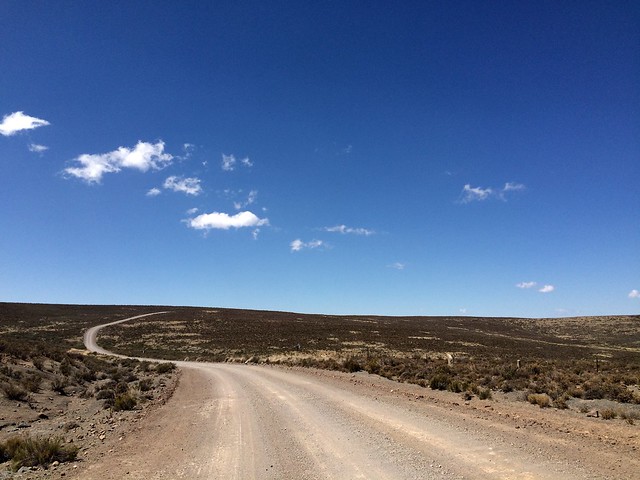 Sutherland was asleep when I reached. Its wide main road was dotted on either side by sloped-roof houses, the occasional store, a police station, a bank, and a church. The busyness I had seen in Clanwilliam was absent here, and the harsh light washed everything into an even dullness. At the Skitterland guesthouse, a stone cottage behind a low fence on the main street, a plumpish white girl wearing thick-framed glasses walked out to meet me as I got down from the car.

I followed her into a room in an outbuilding behind the main cottage. It was dark and cool inside. Stone walls gave it an unfinished touch, but the room was cosy, furnished as though someone was living there, with suitcases stacked above a cupboard, old magazines on a side table, a locked wooden chest at the foot of the bed, and heavy curtains that shut out the afternoon light. To the right was a kitchen, equipped with a fridge, a stove, and a microwave, and behind the kitchen was a large bathroom with white tiles and a recessed shower area enclosed by a screen of aluminium chains. I’d seen nothing like it before.

I asked for the wifi password, then for a suggestion where to go for lunch. Her answers were polite and straight, and in her manner she was neither warm (like the Gannaga lodge folks) nor smart and peppy (like the people I’d seen in Cape Town). This small-town simplicity was visible even in her appearance, in the twin ponytails and the shiny maroon frock she wore on this hot, white, and deserted afternoon.

‘The Jupiter’, which was set in a barn-like building a few hundred meters from my guesthouse, offered ‘Accommodation, Restaurant, Fully Licensed Pub, Smokers Area, Big Screen TV’. The menu displayed a note at the bottom, in bold letters: ‘Please note — This is not a fast food restaurant. All care are taken in preparing high quality hot cooked meals. Sit back, relax, meet some people, and enjoy your visit with us.’ And below it: ‘Feel free to tip your waiter!’

The pizza I ordered was hot and of high quality, but there was no one to meet. I sat alone and leisurely ate my lunch, reading, on the iPhone, Carlo Levi’s Christ Stopped at Eboli, a memoir of Levi’s year-long exile in two small Italian towns after he’d been banished by Mussolini’s government for anti-fascist activism. Those towns, Grassano and Aliano, were as remote as this one, and from what I’d seen and read this far Sutherland was an ideal place to banish someone to exile. The region had been used, in the eighteenth century, for sheep farming, and the town was born in the 1850s when a farm that housed a church was split into plots of land and sold to private individuals. The winters here were harsh — Sutherland is one of the coldest towns in South Africa — and farmers migrated their sheep during winter to warmer parts of Tankwa Karoo, a practice still followed by some. (Johann, extolling the qualities of the Ouberg Pass, had spoken of herds of sheep that cross the narrow pass each winter — an unforgettable sight, in his opinion.) These days tourism is the main draw. Signs of hotels and lodges appear all around town, and the locals demonstrate an unusual degree of passion to convince the visitor of Sutherland’s charms.

The young white woman at the restaurant also wore a frock, but this one was yellow and did not shine. I asked how long she’d lived in Sutherland. Just a few weeks, she said. She’d recently finished a course on hospitality management, and was keen on getting some experience. Sutherland was full of tourists, she said. A popular town with many attractions.

“Where are the tourists?”

“Oh, they must be sightseeing somewhere.”

I did not ask where. The afternoon I spent in my room, and later, when the shadows grew long, I walked along the main road but found nothing open. Streets behind this road featured elegant cottages with well-tended gardens that mirrored the affluent streets I’d seen in Clanwilliam, and some others had barns and white-washed houses with gabled roofs. Spruce trees were planted everywhere.

The town fell away abruptly into the desert. Standing on a perimeter street you could see on one side only sparse shrubland, and turning the other way you saw a cluster of cottages, trees, and a church tower emerge, miraculously, out of the desert. Viewed from this angle, it was easy to see why this town, set on a high plateau, was ideal for stargazing.

I did not visit the SALT that evening. It was a Thursday, and night guided tours at SALT were scheduled for Mondays, Wednesdays, and Fridays. By the time I discovered this, it was too late to change my itinerary. Instead, I went to a local stargazing event.

The two hour session began, at 8 pm, with a presentation from Jurg, an elderly white man who ran the show. In the presentation hall were about twenty or thirty tourists, all middle-aged or elderly white men and women. Jurg began with an introduction to the solar system, and went on to the Milky Way, the Andromeda, and a few constellations visible in the southern hemisphere. Then he started a video and slipped away to set up the telescopes. The documentary, which ran for fifteen minutes but seemed much longer, narrated all that Sutherland offered the visitor — churches, graveyards, hilltop ruins of a fort, a museum, flora and fauna nearby, a donkey cart ride through town — and it ended with the note: “And you thought Sutherland only had the SALT?”

Outside, a full moon hung low in the sky. This was not ideal for stargazing, but Jurg promised to make it worthwhile. Using a laser, whose beam shot up and seemed to touch the stars, he pointed at the celestial bodies we’d seen minutes earlier on the screen. We learned how to determine the south from the Southern Cross. Jurg then spoke about the ships deceived by the nearby Diamond Cross or the False Cross — many of these, following the incorrect south, had been shipwrecked. The laser was aimed at Jupiter and Venus, Betelgeuse and Bellatrix, and at one point Jurg drew our attention to the International Space Station, a tiny dot low in the horizon tracing a straight line. All my schoolboy love for astronomy returned with a force that took me by surprise.

We were huddled inside a small enclosure with a wall five feet high, next to a telescope installed on the floor. Two more identical telescopes stood nearby, each in a similarly ringed space. Jurg split us into three groups of seven or eight and assigned each to a telescope. The instruments were equipped with a GPS, and when he keyed in the coordinates of a star or a planet, the device rotated on an axis to aim at the precise spot in the sky. We took turns to look through it. Where the naked eye saw a star surrounded by dark space, the telescope revealed a cluster of sparkling pinpoints. An entire universe lay hidden in every inch of the sky. We looked at the red Betelguese, the blue Bellatrix, Venus, our own moon, and near the end we turned the telescope’s eye to Jupiter.

Jupiter’s Galilean moons — Io, Europa, Ganymede, Callisto — were among the first celestial objects to be discovered through a telescope. When Galileo looked at Jupiter early in 1610, he first saw three objects near the planet and assumed they were fixed stars. In the following months he discovered a fourth one, and deduced that these bodies were actually orbiting Jupiter. Five centuries later we know even the interior composition of these moons, and some suspect that life could exist under the layer of ice on Europa. But all this seemed to matter little beside the physical act of discovering these moons oneself through a telescope. We saw two of the moons that night, shiny little dots next to their mother Jupiter, which was bigger, brighter, and had two dark bands running across it.

Earlier in the session Jurg, addressing the group, had quipped that I’d flown in from Germany to South Africa only to visit Sutherland. The remark was in line with the town’s drive to market itself, but this stargazing experience left me thinking it could be true: I could come to South Africa just for this. The stars were not in Sutherland. They were everywhere, you only had to look up. But you needed Jurg to open its secrets.