[ The fifth and final installment in the South Africa series. The others, in sequence: Cape Town Weekend, Clanwilliam and the rock art trail, Tankwa Karoo and the CIA plot, Sutherland and the moons of Jupiter. ]

Cape Town is four hours by car from Sutherland. The entire stretch was paved, and in the first hour and half, on the R354, the rolling shrubland I’d seen the day before continued. The road was deserted. Moderate traffic appeared on the N1, a single-lane highway where trucks made way for faster vehicles by shifting half their bulk onto the shoulder. The vehicle that passed always turned on its left and right indicators: a gesture of gratitude to the truck now in its wake. The discipline and manners were European, a pleasant surprise.

This was still high country, fifteen hundred meters above sea level. When road began to descend, following a short pass, the scene ahead took my breath away. Set in a narrow gap between two rows of barren and rugged mountains was the greenest valley one could imagine. The transformation was unusual, startling. Beginning at the foot of the desolate mountains, row after row of grapevines filled the entire valley, a pattern broken occasionally by a white barn standing out from the green carpet. A slim line of water shimmered in the sun, and groves of trees wove patches a darker shade of green. It was a stunning aerial prospect, and after several days in the colourless desert I felt the emotion of a weary traveler stumbling upon a vast green oasis.

Below, following the descent into the valley, the N1 traced its entire length along a straight path, vineyards mostly to my right. I barely had time to assimilate this explosion of beauty when I saw, to my left, a shanty town growing out of the desert: a dense mass of shacks, each cobbled together with tin sheets, their roofs held in place by tyres and other pieces of junk. Children in tattered clothes sat playing in the dust, and litter thrown over the fence lay strewn beside the road.

The sight was a rude shock. On one side was a verdant stretch of countryside, a land turned green from labour. On the other those labourers lived in squalor. The juxtaposition was unreal, like a movie set built with the express purpose of conveying this contrast.

Soon I crossed signs cautioning drivers not to buy “stolen grapes” from street-side vendors. The displays had the character of a warning, a rule you could be punished for breaking. I was trying to grasp what this meant when I spotted the vendors themselves, young black men thrusting at passing cars their hands full of grapes. But for those warnings, this would have been an ordinary scene of street-side vendors indulging in trade. Now, after that glimpse at the way they lived, my sympathies lay with the illegal grape-sellers, and those warning signs were another unreal element in this setting.

Further ahead, black men stood waving a set of currency notes at the passing cars. Some were alone, others stood with family. I’d never seen hitchhikers waving money for a ride, and the sight left me disturbed. I did not stop. The stretch dotted by the hitchhikers moved past quickly, and some minutes later, at the city of Worcester, I crossed a casino, a golf course, and large villas on streets arrayed with Mercedes, BMW, and Lexus labels.

The valley seemed like a giant social experiment on how to foster inequality. The setting was ideal: where could one find a contrast clear as this between the haves and the have-nots, both belonging to same local economy? There are slums abutting five-star hotels in Mumbai, but those slum dwellers are not the hotel workers. Here, the grape-farm labourers lived in the shanty town, and worked for those farm owners: a neatly closed ecosystem where few reaped the rewards, others were left with next to nothing. (This did not make the inequality here worse, it only made it clearer. And that clarity added weight to the moral dimension behind living face-to-face with inequality.)

These were impressions I gathered and the thoughts I considered on my drive to Cape Town. Later, back in Germany, I found that the valley I had driven across was the Hex River Valley, the settlement there was called De Doorns (The Thorns), the shanty town was Stofland (Dust Land), and that this place had been the site for riots in 2012 and 2013. Labourers demanding better wages had set vineyards on fire, looted shops, and the N1 was temporarily closed. None of this was surprising. Anyone driving on that stretch could see it was a powder keg waiting for a spark.

I had come to South Africa with no coherent idea of the nation, only images that remained from literature I’d read (J.M.Coetzee, Nadine Gordimer, Rian Malan), movies I’d seen (Neill Blomkamp’s District 9, Richard Attenborough’s Gandhi), cricket matches I’d followed, and from an assortment of media-reports related to apartheid and Mandela and crime. And I left, ten days later, with another set of images, more personal than those I had received before, and more concrete, rooted in specific places.

The physical beauty of the place was extraordinary. Hiking in the Cederberg hills and driving through the Tankwa Karoo, I rediscovered what it means to be truly alone. And this enhanced the beauty I saw around. I knew, just as Louis knew, that I would return. 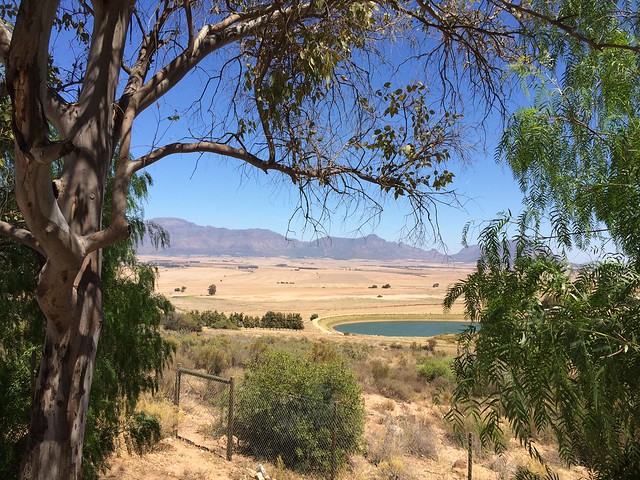 But there was the other side, the people and their history, that was more complicated. Apartheid had ended, but colonial attitudes remained. The blacks and the coloured were free, but many were poor, some desperately so. The whites, mostly rich, were relaxed and warm, and while they worried about crime they were less concerned about what caused it.

Literature may have exhausted itself with the post-colonial era, but here in South Africa that chapter of history was alive. White masters and black servants were uncomfortably common. And the effects of colonialism could be seen, consistently across the towns and cities I visited, in the diffidence of the black or coloured waiter in a restaurant.

In Clanwilliam and Sutherland, the small towns I stayed in, whites appeared to have claimed not just land and the economy, but local history and culture as well. History in these towns began with the white settlers, and everything that followed had whites at the center. The individuals they celebrated — posters of C. Louis Leopoldt in Clanwilliam come to mind — were whites, the tourist businesses that created local narratives were owned by whites. The blacks and the coloured existed only, it seemed, to serve the whites, whose dominance was total.

But it was hard to see how things could be otherwise. Those white settlers had arrived a few hundred years previously, they had set up communities, and their descendants now were enjoying the benefits of centuries of unfair advantage. For the whites living there now, this was their land, their country. And to the observer from outside, the division between these whites and the others, visible in every sphere of life, was puzzling, inappropriate and, since no resolution seemed imaginable, ultimately depressing.

The drive through the Hex River Valley held the essence of my visit. Achingly beautiful vistas set next to the consequences of dire poverty; the dependence of poor blacks on affluent whites; the confusion and helplessness of the itinerant observer. Themes worthy of a great novel.

One thought on “Hex River Valley and the stolen grapes”