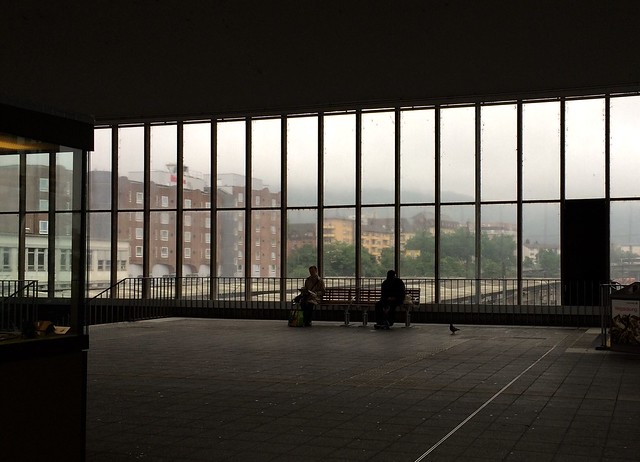 The other morning, there was an incident on the tram. A hundred meters from the Hauptbahnhof stop, where streams of passengers bound for another city pour out each day, the tram stopped. Through the driver’s cabin I saw a bus blocking our way. We waited for the bus to move. It didn’t. Minutes passed. A tram went by in the other direction, then a bus. Our driver, a woman with short golden hair, spoke with the driver of this passing bus. Then she left her cabin and walked through the tram’s length, passing word that the bus ahead had stalled due to a problem. We had to return to the previous stop. Some passengers sighed, looked at their watches. A woman standing near me said, in a distressed voice: Lass mich aussteigen! — Let me get down! I have a train to catch! But the driver had moved on. She entered the cabin at the other end, and the tram began its journey to Stadtwerke, the stop we had passed a while ago.

The woman’s agitation grew. Where is this going! Why can’t they let me out? The others sat unmoving, unmoved. No one commiserated with her, nobody vented their own frustration. The woman, middle-aged, in a yellow overcoat, clutching a black suitcase, remained the sole campaigner.

It was a rainy morning. On the street umbrellas glided past, sprinkling much-needed colour to this unseasonal grey summer day. The tram windows framed blurry outlines of stately old buildings and misty hills in the distance.

Some minutes later the driver trotted back across the tram, toward the original cabin. The woman asked again to be let out.

I can’t do that, the driver replied firmly. I’m not allowed to!

I’m going to miss my train! the woman cried. Can’t you see that? She followed the driver to her cabin, wheeling the suitcase.

We are in between two stops — I can’t let you out! The driver stepped into her cabin and shut the door.

I’m going to miss the train! I have an important business meeting! Who’s going to pay for the damages? You? Why can’t you simply let me out? You have no right to hold me in here!

The rest of us looked on, like members of an audience watching a drama unfold on stage. No one shared this woman’s urgency, but her persistence got the driver to yield. She asked the woman to get off the tram from the small door inside her cabin.

And this is at your own risk! It’s not my fault if you get injured!

The woman hopped across the track onto the road, with her suitcase in tow. Then the tram lurched forward, swiftly gaining speed, and half a minute later we were at the Hauptbahnhof. A man sitting nearby clicked his tongue: If she had waited, she’d probably have reached the station earlier.

We carried home a story that day, the woman, the driver, and the rest of us. Each a different story.

One thought on “Rashomon”