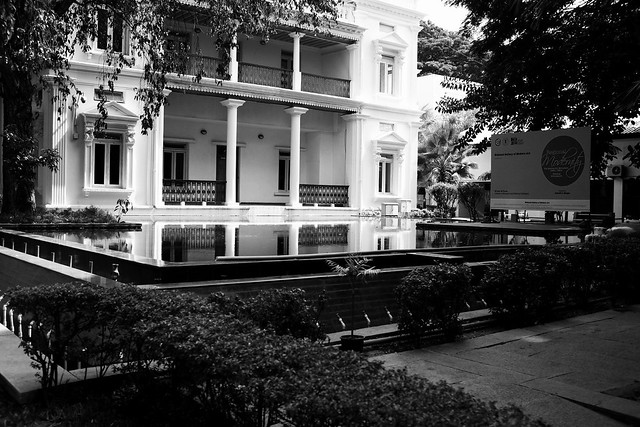 In April, a business trip to Bangalore led me to extend my stay in the city by a week. I spent it at home, with my parents and sister, eating mangoes and watching IPL on the television (often both at the same time). I met friends at their homes or outside. There was a Kannada play, a Kannada movie, a classical concert, a visit to the National Gallery of Modern Art, and even a live IPL game at the Chinnaswamy stadium.

The city felt more familiar than before. I put this to my previous two visits (less than eight months apart) and to the writing, about the city, I had been engaged in the previous year. Bangalore was changing, but I now had a frame to place the changes in and understand them. Nonetheless, there were surprises.

The gated community my parents lived in now had a system of verifying visitors via an app, MyGate. The app notified you about the visitor at the gate, and also triggered an automated call to your landline. You could approve the visitor either by clicking on the app or by pressing a key on the landline, but one did not exclude the other. The security folks at the gate still relied on the old system of directly calling the apartment: so instead of one simple call from the gate to the apartment, we now had two calls and one app notification. You could ignore the app, but the automated call was persistent. My father, eager for conversation, always responded verbally, trying to engage the automated voice asking the listener to “Press 1 to approve, 2 to reject.” He gave up soon, and these calls were picked up by someone else at home.

The apartment’s monthly maintenance fee had recently been hiked to eight thousand rupees. Water, delivered to the apartment in water tankers, was the culprit. Bangalore’s water crisis and the water-tanker ‘mafia’ has been widely reported, and on each visit I read more descriptions of the alarming water situation in the city. But the most common response from the middle-class is to buy water from private operators.

“We wanted flying cars, instead we got 140 characters”: this is Peter Thiel, a Silicon Valley entrepreneur, bemoaning the nature of present-day innovation. In Bangalore, one wishes for things more basic: water, clean air, good public transportation, garbage-free neighbourhoods. Bangaloreans complain about these matters, but (like people everywhere) they go on with their lives, few engaging in attempts to address them. What excites the young middle-class though is the next new app in town, or the cool new venture of a serial entrepreneur.

The entrepreneur I spoke to (an ex-colleague, a friend) had recently left his job and started a venture to build an app that connects doctors and their patients. Listening to him, I wondered if these modern-day entrepreneurs weren’t simply adults playing a video game set in the real world. There are resources to use, there’s a problem to solve, strategies are needed, and so are partnerships. VC funding allows personal stakes to be low. The entrepreneur takes on a real-world problem— the low efficiency of the patient-doctor interaction in simple medical cases, for instance — with the goal of solving it in a profitable way. He is passionate the way gamers usually are, obsessive even at times, and winning matters most. If he fails, he moves on to the next problem, the way a gamer reboots the game or takes on another one. While the gamers are pretty much isolated, these entrepreneurs are out loose in the world, looking at life itself as a game. The most well-known in this breed is, of course, Elon Musk. He enjoys playing many games simultaneously: while he is sending rockets into space (and soon to Mars) and selling electric cars, he is also trying to wire your brain with technology.

Outside of work my activities in Bangalore had little to do with technology. The Tabla-Mrudangam jugalbandi, the play at Rangashankara, the art gallery visit, sipping tea and chatting in Koshy’s, browsing bookshelves at Blossoms: these pleasures were untouched by (and antidote to) smartphones and apps.

For the IPL match at the Chinnaswamy, my father and I took the metro to Cubbon Park. It was my first ride on the local ‘Namma Metro’. The sun was setting on the city as we glided above dense rooftops revealing a life obscured from the streets below, with people sleeping and cooking on narrow terraces. Near each stop the announcements in Hindi, English, and Kannada reminded passengers not to place “bags, tiffin boxes, and other stuff” between closing doors. No one seemed to be listening though, which gave the announcements a character similar to the fasten-your-seat-belt displays we endure on each flight. The passengers, a mix of middle and working class, sat facing each other in the clean, brightly-lit compartments. We covered the distance from Indiranagar to Cubbon Park in fifteen minutes; in a car this would have been an hour’s ride.

Police presence was strong outside the stadium, but that did nothing to dampen the festive spirit. Hawkers were peddling RCB T-shirts and hats; teenage boys hung around with vials of paint offering to mark your cheeks with those letters; groups walked by in many-coloured costumes; boys and girls sat on high chairs marked with the sign ‘Ask me anything’.

“Who will win today?” I asked a boy on one such chair.

He seemed puzzled by the question, but only for a moment. “Punjab will win,” he said, with a cheeky smile.

Punjab — Kings XI Punjab — were the visiting team, but given the record of Royal Challenger’s Bangalore this season, his prediction was not surprising. It turned out right.

After a security check at our gate, a couple of young ladies in red suits handed us beer coupons. Food and non-alcoholic beverages were covered in the ticket price (five thousand rupees), and the buffet was being readied in the dining hall. We were early. The stadium was slowly filling in. On the field players and coaches ran around practising or exercising. Workers pushed rollers on the pitch and later swept it with brooms. Cameramen stood waiting for the action to begin. Loud music blared from the giant speakers nearby. 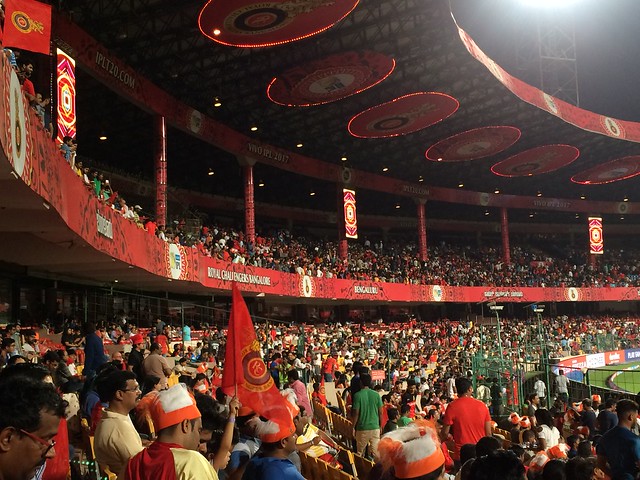 RCB won the toss and elected to field. Before the game began (at 8 pm sharp), the cheer girls took their position. The ones near us were being coached by the cameraman to pose for the camera, which was set on a giant selfie stick operated by another man nearby. The contraption was not unlike a robot arm, rotating and covering all angles in this part of the stadium. The crowd roared whenever the robot turned to them.

In our section I saw families, college boys and girls, groups young and old. They all appeared interested less in cricket than the things around it: the joy of screaming together, calling out at Virat Kohli as he jogged nearby, waving when the camera turned to them, shouting at the cue of the trumpet tune on the loudspeakers. Half an hour into the game, when my father and I stepped down to the dining hall to have an early bite (“We must eat before the crowd converges on the food during the break” I’d told my father), the hall was already brimming with people eating and chatting. The game was being broadcast on two screens, but only a handful stood following it.

During breaks between overs ads rolled on the giant screen near the scoreboard. The cheer girls danced to Bollywood music. Through the game an MC on the speakers goaded the audience to cheer for the home team, getting them occasionally to chant the names of star players.

It is no secret that the IPL is about entertainment, not cricket. But watching the scale of this spectacle left me wondering about the future of the game itself. The game (in this version) is shorter, the boundaries are shorter, and our attention spans are shorter. A fifty-over game seems too long for this generation of cricket-entertainment lovers. On the other hand, chess too has a shorter version, but that hasn’t dulled our appetite for the classic, full-time variant. One hopes Test cricket shares a similar fate.

RCB fared poorly, as they had done all season, throwing away wickets instead of building the innings. (Even Virat Kohli, who has the uncanny knack of scoring well without taking risks, charged early on and was bowled.) On the bright side, this RCB collapse drove us to leave the stadium twenty minutes before the game ended. We avoided the masses, and the journey back (on the Metro, whose timings had been extended for this game) was uneventful. It was past midnight when we arrived home. On the dining table my mother had placed a large plate with mango slices. As I ate them, one juicy bite followed by another, the memory of the unexciting game faded away.