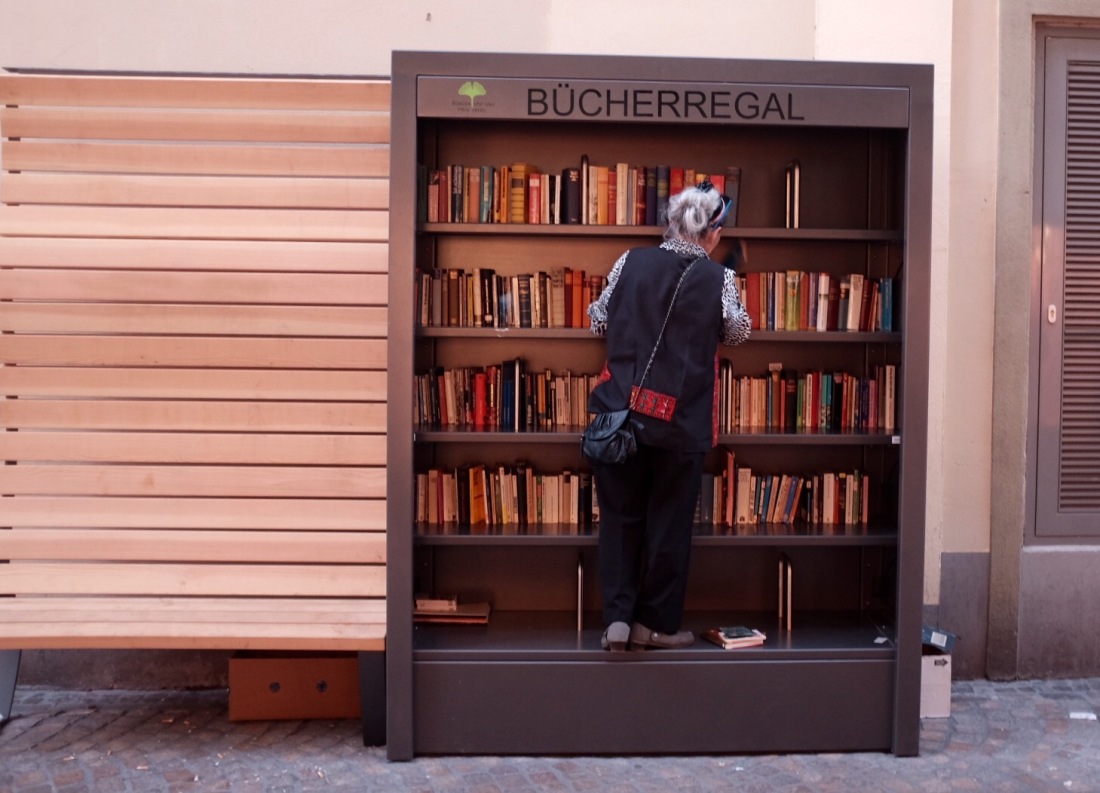 There’s a new Bücherregal in Neugasse now. The old shelf was narrow and made of wood; it matched the street’s character. The new one is taller and wider, a piece of metal under slick grey paint, modern like the new Hallhuber store opposite. Even the wooden bench next to the shelf is new, a piece whose wavy back reaches the shelf’s eight-feet. The combination looks designed, not accidental. This end of Neugasse seems as though it wants to escape into the Hauptstrasse, all glitz and chic.

I cross the shelf on my walks into the altstadt, and sometimes, if my return route leads me into Hauptstrasse, I take the perpendicular Neugasse back home too. There’s always someone standing at the shelf browsing books, but of late I’ve spotted, on three or four occasions, an old woman who mutters to herself while she goes about arranging the books. Not with a librarian’s tic for semantic organisation, but a stickler’s instinct for physical order. She picks up books left behind by careless passersby, large and small volumes lying horizontally or stacked in a pile, and sets them vertically in a row, the way they ought to stand in a bookshelf. Unused spaces are anathema to her: only when a row is packed does she allow a new one. She displays the manner of an impatient mother tidying up her son’s unruly desk, and not until she is done do I gather courage to scan the titles myself.

The other day I found her standing on the bottom shelf, which is wider than the others, reaching for books on the top one. Dressed in jeans and a half-sleeved embroidered jacket over a shirt, she seemed like someone who cared about appearances. Her white hair, sightly ruffled, was held in place under two plastic hairbands and a pair of sunglasses. A black leather handbag, slung over the right shoulder, reached her waist. She was muttering as usual, and I waited, as always.

When she finished, and before she could pick up her bicycle, I gave in to my curiosity.

“Do you do this regularly?” I asked, in German.

“Regularly? Of course! I come here everyday. But even that isn’t enough!”

She shook her head, before continuing: “Just this morning I had arranged everything, and hours later things were a mess! These people!”

Her face was wrinkled, and her blue eyes were bright and striking. A grumpy person with a kind face.

She collected her bicycle and left in a hurry. Nearby, three men stood chatting about science-fiction novels. Speaking English with a Spanish accent, one of them gushed about a book he’d recently read, A Quiet War, set in a world where humans have colonised other planets and moons, while on Earth Brazil has taken over most of South America and even parts of the north.

“Space changes you dramatically, man. Your bone structure changes, you muscles change — you aren’t the same once you leave Earth.”

I was there to scan the bookshelf, but as it often happened, I’d spent more time observing life around it. The space was usually occupied by people looking for books, which made me wonder if the ones who donated them always chose unearthly hours. No real reader wants to be seen giving away her books. I recall walking to the shelf early on a Sunday morning to leave behind books bought long ago (or gifted to me by a well-intentioned but misguided soul). It’s a pity I did not keep a record of those titles; Those-I-Gave-Away could make a fascinating list.

English books on this shelf were as rare as water in a biergarten, so they were easy to spot. On this day I found and picked up a couple of travel books: Chile & Easter Island, Let’s go Vietnam.

Opening them back home, I came across pieces of paper among their pages: itineraries, a map, ticket stubs, slips with names and phone numbers, a tiny pamphlet with a poem in Spanish.

Ah, how we love other people’s secrets, a peek into their memories.

The Vietnam travel guide contained the itinerary, written in blue ink on a ruled sheet, of a couple who had traveled to the country in July of an unknown year. (Most likely after 2007, the year the guide was published).

Itinerary of CC and SS
July

Another sheet featured a detailed breakdown of this itinerary, with labels like “Stadt”, “Tempel”, “Gräber” “Stadt/Spa” “Tagesausflug” next to specific dates.

There was a map of Hue, and two ticket stubs from Ho Chi Minh Museum.

The Chile book revealed a printed copy of page that listed “The Best Wines of the Year”, a small slip with details of a ‘Guesthouse’ somewhere, and a poem in Spanish printed on yellow paper.

I began translating the poem into English using Google. The first few lines gave me pause:

I met a woman
With bright eyes that reveal her heart.
Incognito and fleeting for those who could not see her.

With bright eyes that reveal her heart, Incognito and fleeting for those who could not see her — this could be the Bücherregal Frau, I told myself. I did not bother translating the rest.

One thought on “Bright eyes that reveal her heart”